ChessMoney is now the fastest growing online chess game in the world.

DENVER, Dec. 20, 2021 /PRNewswire/ — The world of chess is not known for controversy, but change is happening. The Queen’s Gambit video series featured a star that challenged the world of conventional chess and resulted in a surge of global interest in chess. ChessMoney is now shaking up chess with provocative advertising and a new innovative online chess gaming service that enables any qualified adult to enjoy the thrill of playing chess for money. 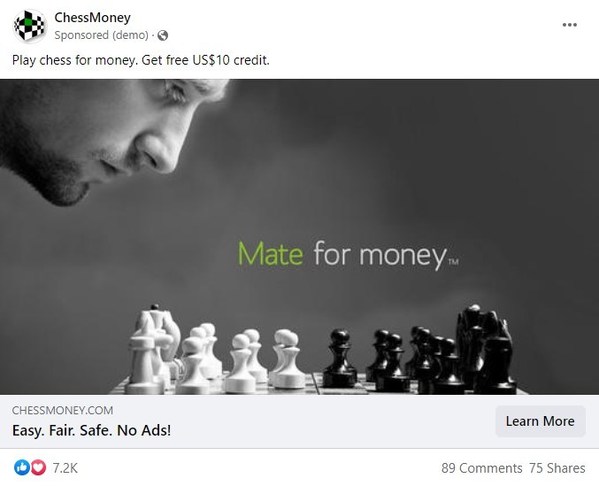 ChessMoney’s advertising tag line is "Mate for Money", which in English has a sexual connotation and in Spanish means kill for money. The campaign has raised eyebrows. Some question the tie-up with chess, while others see it is a clever attention getter. The ChessMoney campaign has already attracted tens of thousands of adults, who have qualified and are now able to readily play online chess for money.

Playing chess for money in clubs and parks has long been a hidden chess pleasure around the world. ChessMoney has uncovered that playing online chess for money has strong appeal among young adult chess players, as well as among adults of all ages looking to add more excitement to the game of chess.

One of the top players on ChessMoney is Felix Abarra from the Philippines, who says: "I am grateful for ChessMoney as it has enabled me to win real money playing online chess, which I love doing."

Since ChessMoney is currently in a Beta trial phase, interested adults can get a free US$10 credit when they register and qualify to play online chess for money. Enjoy and prosper!

ChessMoney LLC is a skill-based, online chess gaming service that enables qualified adults across the world to make handicapped wagers when they play online chess games at www.chessmoney.com.