The live-streamed webinar was launched on February 17, hosted by National Digital Literacy Movement (GNLD) Siberkreasi and supported by the Ministry of Communications and Informatics.

JAKARTA, Indonesia, Feb. 24, 2022 /PRNewswire/ — The Indonesian Ministry of Communication and Informatics through the National Digital Literacy Movement (GNLD) Siberkreasi has unveiled a knowledge-sharing webinar series on NFT and Blockchain. Launched as part of the Ministry’s #MakinCakapDigital campaign, the series aim to educate public, while responding to the surge of interest in cryptocurrencies and blockchain amongst Indonesian youth in recent years. 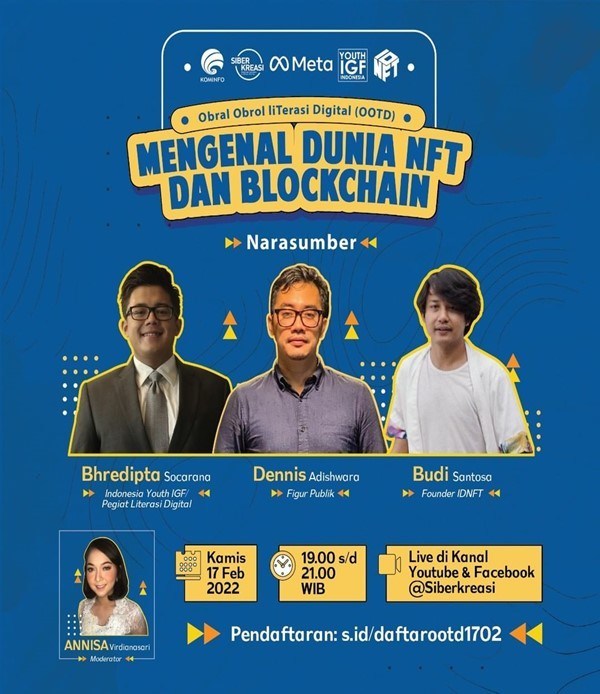 Along with the ongoing growth of cryptocurrencies worldwide, Indonesia has seen a significant influx in public interests and adoption rates. Last year, a report from an Australian blockchain education startup ranked Indonesia the highest in the list of countries with the greatest interest in crypto. According to the report, the number of Google searches on cryptocurrencies, NFT, and blockchains in Indonesia soared over the last twelve months compared to other countries. Indonesia also had one of the highest increases in engagements with articles about crypto globally.

The interest was apparent during the webinar, which was attended by hundreds of live participants during the live stream and continues to garner thousands of views for the recording to date. At the webinar, Syammas P. Sarbini from the Indonesian NFT Community led the discussion on NFT fundamentals and how it functions in today’s world. Meanwhile, Bhredipta Socarana from Indonesian Youth IGF talked about digital literacy surrounding the blockchain system, its implementations, and why more Indonesian users realize its potential.

In 2021, there are over 7,4 million cryptocurrency owners in Indonesia, an 85% increase compared to 2020. The country was also in the global spotlight earlier this year after a local student, Sultan Gustaf Al Ghozali, sold the equivalent of USD1 million of NFT from his self-photo series "Ghozali Everyday."

Syammas P. Sarbini, however, cautioned the public on making a hasty investment. "Ghozali Everyday is an anomaly. Anyone wanting to explore the world of NFT and blockchain needs to focus on the community and growth, not on making easy money," he said during the webinar, highlighting the importance of understanding the platform – both risk and opportunities – before jumping on the bandwagon.

Dennis Adhiswara, a public figure and NFT collector, concurred. At the webinar, he shared his experience in discovering and collecting NFT art. "The real values and potentials of NFT lie in its technology. People need to understand and know the ins-and-outs of the technology that backs it, understand its challenges, and protect themselves from frauds," said Dennis.

To help mitigate the risk, the government runs various digital literacy programs to educate the Indonesian public on how to safely navigate the latest internet technology and develop the necessary skills to thrive.

For more information about the Siberkreasi’s initiatives, please visit http://info.literasidigital.id and follow @siberkreasi on social media for upcoming events.

About The Ministry of Communication and Informatics of Indonesia

The Ministry of Communication and Informatics of Indonesia through Ditjen Aptika has the primary function of spreading and developing the national digital infrastructure to accelerate Indonesia’s digital transformation.

The Ministry is working with National Digital Literacy Movement Siberkreasi as its partner to provide education on digital literacy to the broader public through various forms of media. This movement is focused on using digital literacy as a way to elevate the national capability and to further the Indonesian people.