The contract provides for exclusive content in the form of short videos for the platform, brand display on field advertising boards and promotional actions

SAO PAULO, Sept. 15, 2021 /PRNewswire/ — This Friday, the Brazilian Football Confederation (CBF) presents Kwai, an app for creating and sharing short videos, as the latest sponsor for all national men’s and women’s soccer teams. The contract lasts for two years, valid until the end of 2023. 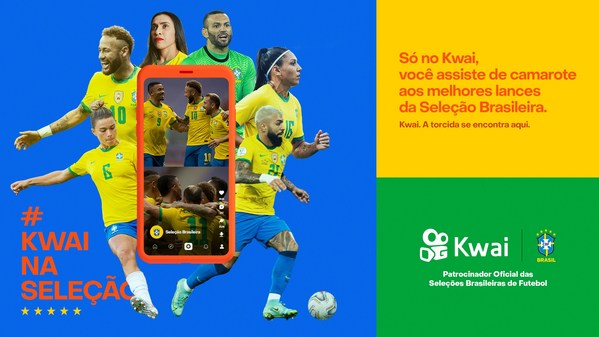 The sponsorship provides exclusivity in the production of content in the form of short videos for the platform in the official profiles of the Women ‘s Team, Men’s Team and also in the Kwai na Seleção profile, in addition to the display of the brand on signs around the field in National Team training sessions and backdrops. Kwai will also have exclusive behind-the-scenes access, being able to perform activations during practice and match breaks.

"The Brazilian team has been following ever more closely the digital transformation and the behavior of the new generations. We recently closed a sponsorship with the biggest game in Brazil and this partnership with Kwai is another step in this direction. Brazil’s soccer teams are one of the more powerful content that the platform will have to engage with our fans. We are sure that this union with Kwai will be a success, bringing the young audience even closer to the Brazilian teams", says Gilberto Ratto , Marketing Director at CBF.

"Kwai wants to show the cultural diversity of Brazil on the platform and a great opportunity for that is with soccer. We know how important and socially relevant sport is for Brazilians and with this partnership, we want the app to be a complementary experience for the fans", comments Mariana Sensini , Director of Kwai in Brazil. "We will have a lot of exclusive material and great content projects with the men’s and women’s teams."

Kwai is also a sponsor of Brasileirão Assaí championship until the end of 2022, and offers the public that follows the competition more emotion and interaction within the app with special frames and exclusive content. Now as a sponsor of all national soccer teams, the platform will accompany the men’s and women’s teams in friendlies and important moments such as the final stretch of the qualifiers for the 2022 World Cup, the Qatar World Cup in 2022, the Women’s America Cup in 2022, and the Women’s World Cup in 2023.