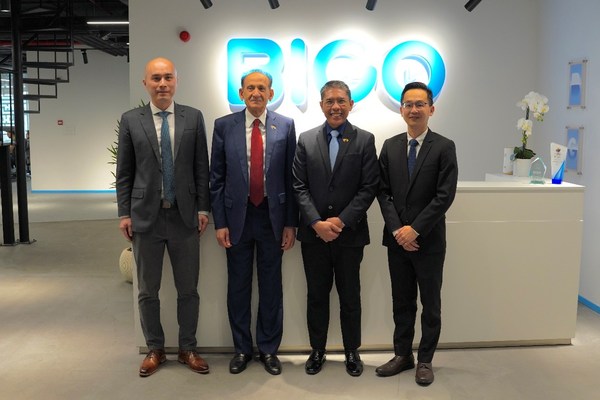 Since 2019, BIGO has grown rapidly across the Middle East and North Africa (MENA) Region. The company started with just 50 employees in Jordan in late 2019, and within three years grew to a workforce of 1000 employees. The company recently set up a second office in Irbid, the second largest city in Jordan.

During the visit, BIGO executives shared with Minister Maliki and Ambassador Zaman on the past developments in Jordan as well as the future plans for expansion and partnership in the Kingdom. This included expanding the development teams and product offerings in Jordan, and leveraging on Jordan as a springboard to the region.

"We are honored to have Minister Maliki and Ambassador Zaman visiting our Amman office," said Mike Ong, Vice President of BIGO Technology. "While Jordan accounts for only 3% of the MENA population, the World Economic Forum earlier reported that it is home to 27% of the top 100 Arab startups shaping the Fourth Industrial Revolution. With this in mind, it is clear to see that Jordan leads the region in terms of technical talents."

The visit was a testament to BIGO’s achievements in Jordan, being one of the biggest Singapore companies in the country. As a homegrown Singapore brand, BIGO is the embodiment of what it means to grow global, but stay local.

The growth and development of the company in the Kingdom has been largely supported by the strong and longstanding relations between Singapore and Jordan. As such, the efforts of both countries in recent years continue to lead to the exploration of new areas to develop bilateral relations, including in information and communications technology.

"We greatly appreciate the support that we have received from the government and businesses in both Singapore and Jordan," said Mr. Ong "Being a Singaporean company and having our MENA regional hub office in Jordan, BIGO is proud of its heritage and we look forward to support all efforts made by both countries to strengthen their economies."

During the visit, Minister Dr. Maliki Osman and Ambassador Shamsher expressed their appreciation to BIGO for hosting the visit and commended BIGO for its strong development and becoming one of the largest Singaporean companies in the Kingdom.