BEIJING, Sept. 13, 2022 /PRNewswire/ — During the 2022 China International Fair for Trade in Services (CIFTIS) which was concluded in Beijing on Monday, many international enterprises signed cooperation agreements with China to deepen cooperation in service trade, reflecting the strong attraction of the Chinese market for foreign investment. 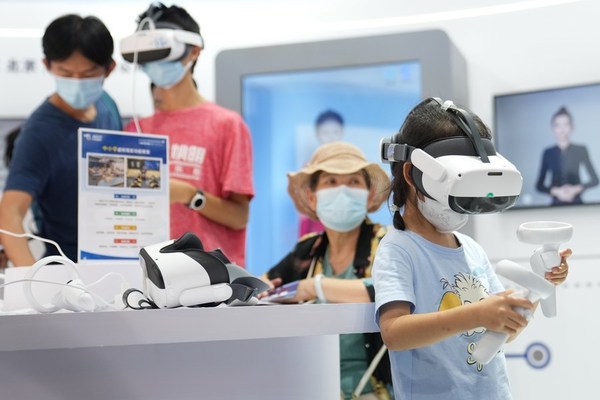 A girl tries a VR device at the cultural and tourism services exhibition hall in the Shougang Park during the 2022 CIFTIS in Beijing, capital of China, Sept. 4, 2022. (Xinhua/Ju Huanzong)

As one of the world’s largest and most comprehensive fairs for trade in services, the 2022 CIFTIS has achieved fruitful results in boosting international cooperation.

During the Fair, Air China and the British engineering giant Rolls-Royce announced to set up a new joint venture of engine maintenance, repair, and overhaul (MRO) in Beijing, with a registered capital of 190 million U.S. dollars.

"Although it is the first time to participate in the CIFTIS, we are very optimistic about the cooperation with China," said Cao Qian, government affairs manager of Italian law firm D’Andrea & Partners Legal Counsel, adding that the firm has set up offices in Beijing, Shenzhen and Hong Kong in recent years, hoping to find more cooperation opportunities through the services trade fair and help the development of high-end legal services in China.

"We already have deep partnerships with our Chinese industrial partners," said Hou Mingjuan, global vice president of Qualcomm, adding that China’s commitment to high-quality development through high-level opening-up has given multinational companies like Qualcomm the confidence to continue and further expand cooperation with Chinese customers.

According to Ouyang Rihui, assistant dean of the China Center for Internet Economy Research at the Central University of Finance and Economics in Beijing, China’s service sector is creating a "magnet effect" in the world.