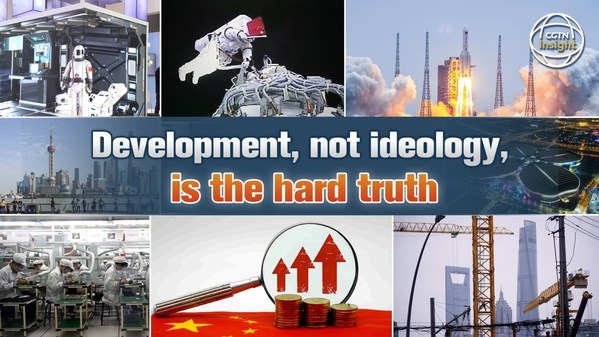 Development, not ideology, is the hard truth

The late Chinese leader Deng Xiaoping’s words go straight to the truth of China’s rapid growth – the country has chosen a development path that suits its actual conditions.

Before Deng led China onto the path of reform and opening-up in 1978, China was locked in the ideological box, splitting hairs over socialism vs. capitalism. It insisted that everything and anything regarding socialism must be, by nature, better than capitalism.

At that time, China may have achieved egalitarianism on an unprecedented scale, but it was of poverty – everyone was equally poor.

Deng declared that if socialism means poverty, it is not for China. The choice was socialism with Chinese characteristics for the benefit of the people.

But this has not meant rigid adherence to a centrally-controlled economy. As the country entered a new stage of development, the focus shifted to opening up and overhauling the economy to accelerate industrialization.

It has made the country more dynamic, test-based and forward-looking, and turned the Chinese people into the final arbiters of reform and social experimentation.

It is in this broad context that China has transformed itself into the world’s second largest economy.

Being a socialist country also does not conflict with its efforts to promote a market economy and international trade.

Since its accession to the World Trade Organization in 2001, China’s exports rose nearly ten times to $2.59 trillion in 2020, and imports nearly eight-and-a-half times to $2.05 trillion.

National institutional flexibility explains these strides. It has saved the Chinese people from poverty as well as political and ideological hair-splitting and instilled a strong spirit of pragmatism, realism and hard work among them.

Fast-forwarding to the 21st century, President Xi Jinping has declared that China is now in a new era of socialism with Chinese characteristics.

It is one based on multiculturalism and multilateralism. The country has become a leading champion of free trade, sustainable development, poverty alleviation and environmental protection.