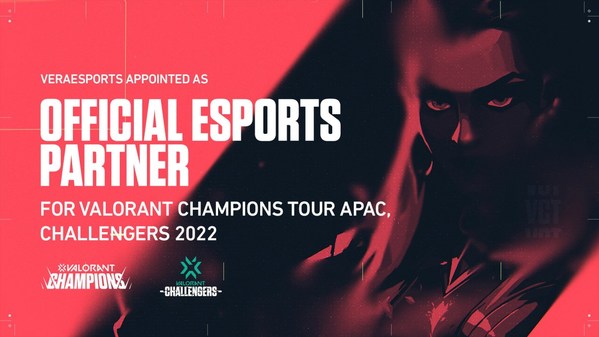 VALORANT is a 5v5 character-based tactical shooter, which has rapidly gained a significant Esports following, racking up over 46 million hours of gameplay viewed worldwide to date. The VALORANT Champions Tour is now entering its second year following the climax of its 2021 tour, where over 1,200 teams participated across the APAC region.

The VALORANT Champions Tour is a year-long event that takes the best teams from across the globe and pits them against each other during three levels: Challengers, Masters, and Champions. In 2021, the Champions Tour attracted over one million peak viewers and averaged some 500,000 viewers during the course of the tournament.

The appointment of VeraEsports as official Esports broadcasting partners for the VALORANT Champions Tour APAC will make exclusive content available for VeraEsports viewers, including match highlights, special features, and access to an exclusive library of content. VeraEsports content will be available in Indonesia, Thailand, Philippines, Singapore, Malaysia, Vietnam, Taiwan and Hong Kong. Collectively, it represents one of the largest Esports partnerships for Riot Games in the APAC region to date.

"We are proud to renew and enhance our partnership with Riot Games and the VCT. Enabling new and breakthrough community experiences is our goal and this year we bring even more value through an exclusive VCT content hub on VeraEsports. The community will now be able to Watch and Earn across both VOD-based content and live broadcasts. We’ve only just scratched the surface on what we can achieve together with Riot Games and we are excited to bring more value in the future"

VeraEsports will enhance the VCT APAC tournament through its "Watch and Earn" program, which empowers Esports fans to earn points and redeem them for exclusive rewards while they watch their favorite Esports tournaments. VeraEsports will be beta testing its patented Proof of View (POV) technology, developed by its parent brand Verasity, to combat fraudulent advertising viewership during the Valorant Champions Tour APAC.

"This partnership reflects the great strength and growth potential of the VCT in the region. Despite VALORANT Esports being launched only about a year ago, we’ve had an amazing level of engagement and passion from our community. We look forward to working with VeraEsports on making VCT APAC even better this year by bringing the very best VCT content to our players and fans across the region."

Through this partnership, VeraEsports and Riot will continue to explore synergies and co-development initiatives throughout 2022 and beyond.

About VALORANT – VALORANT is a competitive 5v5 character-based tactical shooter for the PC developed by Riot Games. VALORANT is a precise and lethal multiplayer game with high-fidelity gunplay, a diverse arsenal of guns, agents with unique abilities, and competitively tuned maps for thousands of hours of play. VALORANT is a free-to-play game and optimized to perform on a wide variety of PC hardware, allowing for a global audience to compete. Demonstrated by the game’s best-in-class game server quality, global infrastructure, and proprietary anti-cheat technology, Riot Games is committed to preserving the core tenets of the tactical shooter genre and upholding the competitive integrity of the gameplay experience.

About Riot Games – Riot Games was founded in 2006 to develop, publish, and support the most player-focused games in the world. In 2009, Riot released its debut title, League of Legends, to worldwide acclaim. League has gone on to be the most-played PC game in the world and a key driver of the explosive growth of esports. As League enters its second decade, Riot continues to evolve the game while delivering new experiences to players with Teamfight Tactics, Legends of Runeterra, VALORANT, League of Legends: Wild Rift, and multiple work-in-progress titles. Riot is also building the world of Runeterra through multimedia projects across music, comic books, board games, and the upcoming animated series Arcane. Founded by Brandon Beck and Marc Merrill, and led by CEO Nicolo Laurent, Riot is headquartered in Los Angeles, California, and has 2,500+ Rioters in 20+ offices worldwide.