Living in a techie generation, we have been exposed to lots of Social Media platforms. We have our information shared online for the world to see, posing a serious threat to privacy.

To counter this issue, there has been a rapid increase of apps for secured messaging. Gladly, Twitter, having a fair share of users, seems to be making their move to have direct messages encrypted.

Computer Science student Jane Manchun Wong, spotted the test on the Twitter app version days ago.  Ms. Wong posted a screenshot of the test on the android app, gaining attention. Aside from the secret conversation itself, the screenshot showed that one can view encryption keys for both the sender and the recipient.

Note: Android application packages (APKs) are often the testing ground of companies whenever they have features being worked on for updates to be made available in the future.

As stated by techcrunch, what stirred the coffee was when whistleblower Edward Snowden opened up the topic with Twitter CEO Jack Dorsey. The CEO tagged the idea as reasonable and something to think about.

If Twitter continues to launch the feature, it will allow users to have secret conversations. The platform will then be safe for sensitive communication including those involving whistle-blowers.

The exchange of messages will strictly be between the sender and the receiver only. Meaning, no interception from the platform being used or from any authority who may want to have access to it.

With all the attention being drawn to the test being done by Twitter, Mr. Dorsey responded to a tweet with a hush. 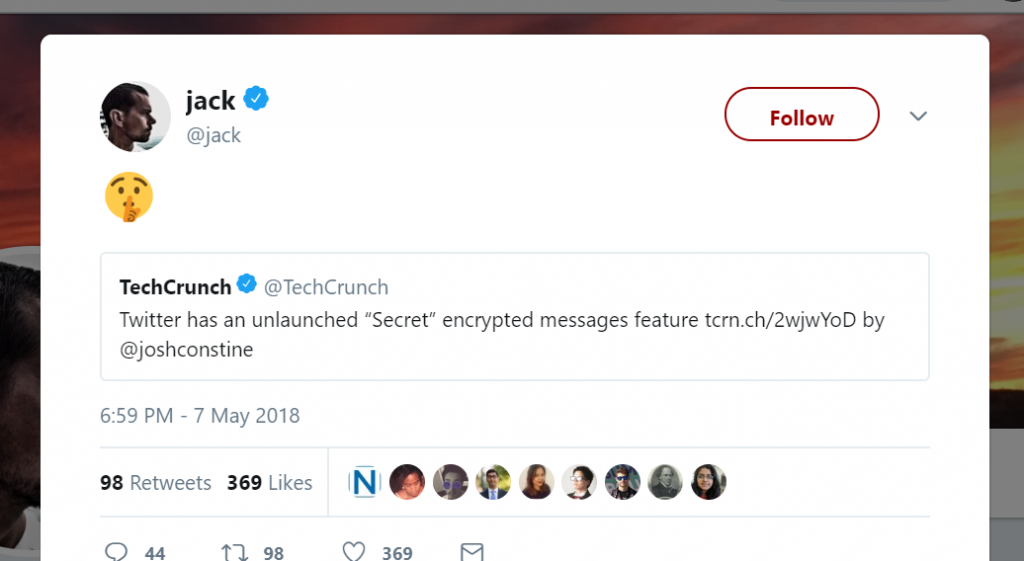 We don’t know how long this test will take or if the feature will ever be launched. Well, hopefully it will be.

Twitter has been a widely used platform for sharing all sorts of information. But without encryption on direct messaging, the worry of being monitored or snooped on won’t go away. So, let’s all wait and watch out for any updates on Twitter.