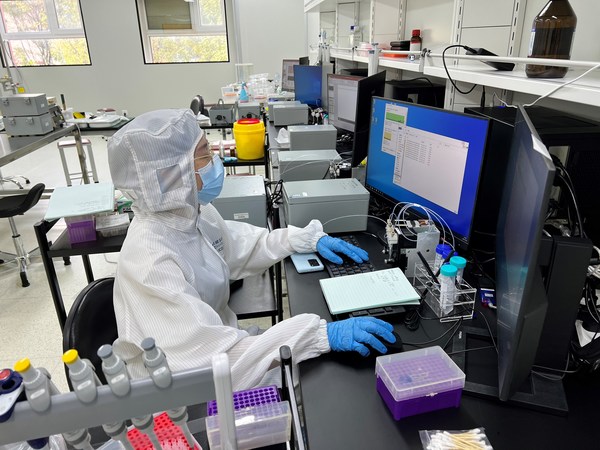 An employee of Qitan Tech works at the company’s lithography workshop.

Qitan Tech, founded in Chengdu in 2016, is in the DNA sequencing business. Through years of research and development, the company has launched China’s first nanopore-based single molecule gene sequencer.

Different from the mainstream next-generation sequencing technology, it has broad prospects for future applications due to its advantages of long-read capability, portability, direct-sequencing ability and the real-time output of results.

"The application scenarios of the nanopore-based sequencing technology are manifold and beyond our imagination," said Xie Dan, one of the founders of Qitan Tech.

In the area of public health, the technology is helpful because of its small size. This helps end the dependence on laboratory-based testing. Testers can be brought to the frontline at anytime and anyplace to solve problems.

"As a company engaged in biomedicine, the benefits brought by Chengdu’s industry supporting facilities and business environment are clear," Xie said. He added that Chengdu Science and Technology Bureau is continually improving the business-support system, so that startups can focus on their R&D.

Another Chengdu company said it will bring an on-demand "special air bus" into public life to solve travel problems in big cities.

On Sept 22, urban air traffic pioneer Volocopter joined hands with Aerofugia – a subsidiary of Geely that is engaged in unmanned aerial vehicles – and launched a joint venture in the Chengdu Hi-Tech Industrial Development Zone.

The joint venture will be responsible for the production and market operation of Volocopter’s products in China. It plans to help launch urban air transport within three to five years. Chengdu will be one of the first cities to test the project.

In addition to the two innovation-driven companies, there are a handful of similar enterprises in Chengdu, as the city is making every effort to boost high-level scientific and technological innovation.

In 2020, there were 62 city-level and above technology business incubators and spaces launched, with some 6,000 high-tech enterprises registered in total. The revenue of the city’s high-tech industry has hit a 1-trillion-yuan ($154.5 billion) scale.

The city government is rolling out policies for the construction of the Chengdu-Chongqing Twin-City Economic Circle. It hopes to build itself into a national-level scientific and technological innovation center.