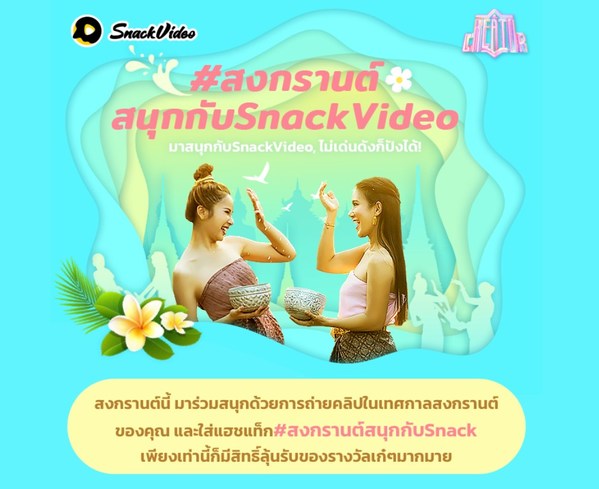 The campaign follows a series of warmup events on SnackVideo, which will last until April 20. The campaign aims to scout for more talented content creators and encourage more users to produce entertaining content on short video platform SnackVideo. The six top users or more in this campaign will be featured with SnackVideo.

Popular Creators like Kyutae Oppa, Meijimill and DJ.DREAMERTH have joined this SnackVideo campaign as mentors. They’ll give out advice and tips to SnackVideo users and even record reaction videos of themselves when there are good videos submitted by users as part of this campaign.

Simply by registering the campaign in SnackVideo, you can get a chance to collaborate with popular creators and explore various activities. For example, users can join in a fun virtual water fight relay challenge under the certain hashtag, as a unique way to pass on best wishes to your friends. SnackVideo also offers the easiest way for user to fully unleash their creativity by creating and presenting their own way of spending the festival.

With successful experience in holding Creator Academies in Indonesia and Pakistan, SnackVideo has also prepared other exciting Songkran-related challenges and plentiful awards for its Thai participants.

First prize winners will be rewarded with a camera and exclusive opportunities of signing with SnackVideo. Other lucky users can get diverse prizes varying from phone bills, tickets to Songkran Festival to donations in their names and so on.

In the Creator Academy, SnackVideo hopes to enable users to potentially build up careers as content creators and understand the best practices of the industry with the help from former and current KOLs.