Thanks to the popularity of global K-webtoons, the webtoon service platform "RK Toon", the Korean-Indian cultural exchange bridge, will be launched 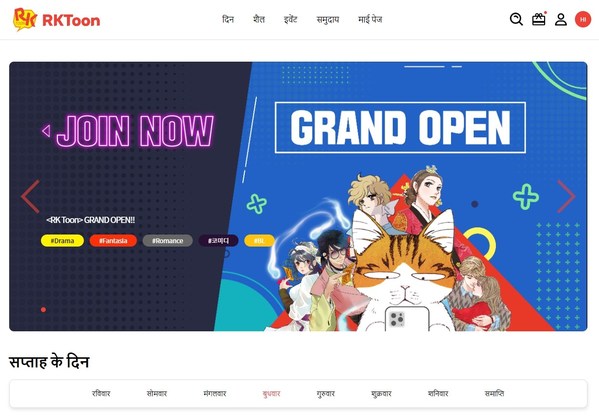 Rockin’ KOREA Co., Ltd has contributed greatly to the overseas promotion of Korean comics and webtoons by hosting Korean webtoon exhibitions online and offline, as well as metaverse webtoon exhibitions, in other countries, including India, China, and France. The company will begin the service of RK Toon, the K-webtoon service platform, targeting the Indian market with a population of 1.4 billion or more, with the support of the Korea Creative Content Agency (KOCCA) as a part of the project "2022 Building and Operating Overseas Cartoon Platform" as well as with the active cooperation of the Korea Trade-Investment Promotion Agency (KOTRA).

The webtoon platform RK Toon will start K-webtoon services in Korean, English, and Hindi. Over 600 cartoon IPs owned by Rockin’ KOREA, including those of more than 150 cartoonists, will be serviced sequentially. The cartoons include those of legendary Korean cartoonists, such as SooYeon Won, KyungOk Kang, and Na Yeri, as well as up-and-coming cartoonists who are gaining popularity at home and abroad, such as Jimmy, LUDA LEE, and WooGang. The webtoon platform, which will be open for service in November, is scheduled to be introduced in India, which is also known as the land of Bollywood, where the film industry has flourished first, and making dramas or movies with these IPs is also expected in the future.