SINGAPORE, Aug.6, 2021 /PRNewswire/ — Enterprise Asia, the organiser of the prestigious fifteenth Asia Pacific Enterprise Awards (APEA) 2021 Regional Edition is pleased to recognise 59 exceptional award recipients who have exemplified excellence and perseverance in this unprecedented period. The APEA awardees have proven resiliency and accelerated tremendously to overcome the unprecedented economic conditions wrought by the global pandemic. 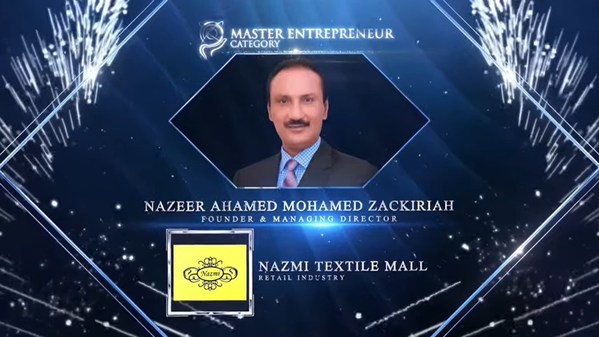 The APEA, an initiative by Enterprise Asia, the region’s leading NGO, is the largest regional recognition and acknowledgement programme for trailblazers in the business community. APEA prides itself as a testament to the commitment, aspiration, and true entrepreneurship. With over 800 nominations received each year, and about seven percent were commended to the most deserving for recognition. This year, an impressive number of 130 finalists from 15 countries were up for consideration in the final round of judging and only 59 were crowned as award recipients.

Nazeer Ahmed Mohamed Zakariah is the personification of persistence and determination. Well-known today as the founder and Managing Director of Nazmi Textile Mall, Nazeer came from humble beginnings. Nazeer Ahamed Mohamed Zackiriah was born in Tamilnadu, India in January 1955. Since a child, his dream was to become a businessman. At the age of 23, Nazeer came to Brunei Darussalam and started off his business journey as a textile salesman. After 14 years in the industry and despite having limited capital, Nazmi opened his own textile shop in 1992 in Bandar Seri Begawan.

Nazeer’s marketing strategies evolve according to the changing nature of consumers’ buying behaviour and habits. Getting hands on and conducting continuous on-the-job research has helped Nazeer to bolster his confidence and guided him when he was expanding his business. He believes that many things in life grow out of needs, and to meet these needs, you develop determination. This determination, he believes, helps an entrepreneur to take on challenges and to also find different ways of tackling situations.

In 2000, Nazeer opened his flagship outlet at the Delima Jaya Complex. The shop sold fabrics of quality, incorporating exclusive designs, imported directly from Italy, Japan, Indonesia, India and the Middle East, among others. In 2004, Nazeer become a notable figure in the business community where he was elected as the President of the Indian Chamber of Commerce in Brunei Darussalam. Nazeer then opened the Nazeemah Department Store at Medan Tanjong Bunut in 2011. In the same year, Nazeer was elected as Vice President III of the Brunei-India Friendship Association.

Today, Nazeer runs a business empire with nine outlets in Brunei and one in Dubai. Nazmi Textile Mall is available in Delima Serusop, Manggis, The Mall Gadong, Athirah, Yayasan, Tanjung Bunut, Annajat Complex and other flagship stores such as Nazmi Qairah Fashion House, Home of Textile, Economy and Home De?cor. Nazeer’s perseverance in running a business empire that encompasses 13 outlets — 12 in Brunei and one in Dubai — is supported by a solid team of employees. The textile empire employs close to 100 staff and generates revenue of 15 million Brunei dollars. Each outlet is managed according to principles that Nazeer has steadfastly held on to, such as placing customer satisfaction as the priority.

Determination and discipline form the backbone of Nazeer as an entrepreneur whose business now include home de?cor and fashion in addition to textiles and fabrics. Also an active philanthropist, Nazeer gives back to the community – he is a regular benefactor to various charitable organisations and the underprivileged.

Moving forward, Nazeer plans to expand the business in textile, fabrics and home decor across Brunei to include all 4 districts. Nazeer reminds his supporters, "Loyalty to your customers is as important as excellent service".

Enterprise Asia is a non-governmental organisation in pursuit of creating an Asia that is rich in entrepreneurship as an engine towards sustainable and progressive economic and social development within a world of economic equality. Its two pillars of existence are investment in people and responsible entrepreneurship. Enterprise Asia works with governments, NGOs and other organisations to promote competitiveness and entrepreneurial development, in uplifting the economic status of people across Asia and in ensuring a legacy of hope, innovation and courage for the future generation. For further information, visit www.enterpriseasia.org.

Launched in 2007, the Asia Pacific Enterprise Awards is the region’s most prestigious awards for outstanding entrepreneurship, continuous innovation and sustainable leadership. The Award provides a platform for companies and governments to recognise entrepreneurial excellence, hence spurring greater innovation, fair business practices and growth in entrepreneurship. As a regional award, it groups together leading entrepreneurs as a powerful voice for entrepreneurship and serves as a by-invitation only networking powerhouse. The program has grown to encompass 14 countries and markets all over Asia. For more information, visit: www.apea.asia.