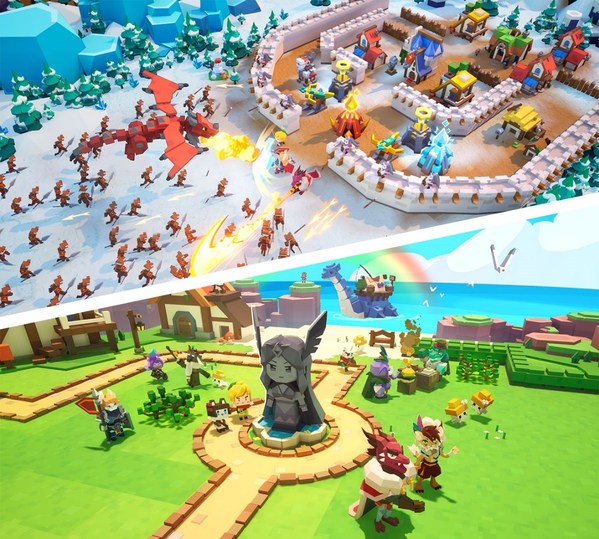 When a nameless brave man finds himself stranded on the continent of Valudo, he feels that the protection offered by the world’s only goddess is gradually dissipating. So he becomes determined to find any trace of the goddess…Whether you like to chop down trees or plant fields, hang it all up and relax, explore mazes or seek out magic pets and divine weapons, you can create your own fun experience with the rich gameplay of Monster Land: Builder.

The theme of the game is survival on a crisis-ridden desert island, while simulated construction as part of the process of land reclamation and building of an island is fundamental to survival. In the daytime, players can enter the cave with their brave partners in an adventure to do battle with monsters and claim treasures. This scenario integrates puzzle solving and fantasy BOSS gameplay. At night, the gameplay becomes a tense and exciting tower defense game, in which players must build defense towers with their brave partners, to resist the invasion by demons, and jointly defend their home.

In addition to the rich gameplay system, freedom and ease of play is another major highlight of this game. Today’s fast-paced life, work, and even games are stressing people out. In Monster Land: Builder, players can choose to wait for the big fish on the river, or enter the cave and steal the monster’s private money stash. The gameplay is rich but, at variance with other gameplay models, will not tire players out by putting them under the pressure of feeling that they will fall behind if they don’t play the game through to the end in one sitting.

Since launch in Malaysia, Singapore, Taiwan SAR and Hong Kong SAR in March of this year, Monster Land: Builder has received a worldwide overall rating of 4.53 in the App Store, and garnered Editor’s Choice on Google Play. With an intricate design, novel content and differentiated positioning, the title has received notable positive response from the market.