SHENYANG, China, Oct. 21, 2020 /PRNewswire/ — At the 9th Shenyang Faku International Flight Conference, which opened on the 17th, a comprehensive exercise of aviation fire emergency rescue across water, land and air attracted the attention of visitors. 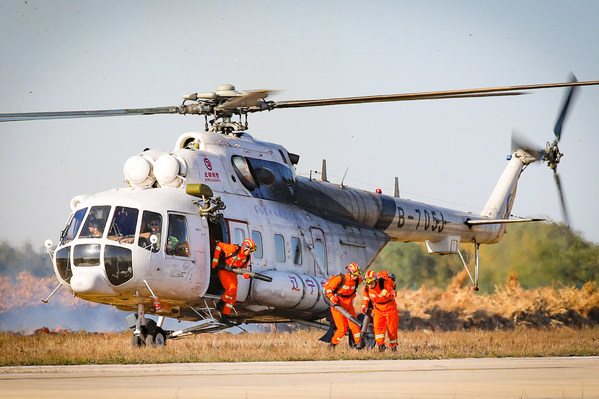 The crew participating in the aviation fire emergency rescue drill come down from the Mi-171 helicopter to the fire scene.

"The unmanned helicopter we used in the exercise has a maximum load of 15 kilograms, a maximum speed of 150 kilometers per hour, can withstand force 7 winds, and can also realize sea flight waterproof and anti-salinization. Its own helicopter fuselage and propeller design for airflow can enable it to achieve greater load and fly to higher heights. It can carry 4-6 fire balls at a time, which is more suitable for emergency rescue. At present, this product has been put into use in many cities in China," Chen Kun, general manager of Shandong Ruitai Zhengqian Intelligent equipment Co., Ltd.

In order to give further play to the characteristics of fast response, strong mobility and wide scope of aviation rescue, Liaoning is making extensive use of mobile Internet, big data, cloud computing and other modern information technology to actively promote the construction of aviation fire emergency rescue system, according to the Publicity Department of Shenyang Municipality.

The fire scene information is sent back to the command center to provide decision-making basis for situation analysis and situation research. Liaoning has gradually promoted the use of drones for disaster reconnaissance and three-dimensional modeling before real-time rescue. At the same time, adopting UAV countermeasures can ensure the clearance of the fire scene.

"Air rescue, a fast and efficient rescue method, has been recognized by all sectors of the community. This exercise scientifically set up disaster detection, forest and grassland fire fighting, high-level fire fighting, water rescue, and aviation medical rescue and other exercise subjects, tested the mechanism and process, but also improved the actual combat capability," Jiang Dapeng, director of the Rescue Coordination and Preparedness Management Office of the Liaoning Provincial Emergency Management Department, said, "In the next step, the Liaoning Provincial Emergency Management Department will continue to focus on improving the aviation rescue capability, fully support all localities in promoting and improving the aviation fire emergency rescue system and mechanism, and effectively improve the response speed and actual combat capability of aviation rescue."

Image Attachments Links:
Link: http://asianetnews.net/view-attachment?attach-id=374667
Caption: The crew participating in the aviation fire emergency rescue drill come down from the Mi-171 helicopter to the fire scene.