Aiming to incubate the community-owned Anime Metaverse, Kawaiiverse recently launched their first ever Hackathon with the mission to find promising talents from all over the world, starting with gaming projects.

ROAD TOWN, England, July 13, 2022 /PRNewswire/ — Teams of game developers and individuals with passion for games will have a chance to win an initial prize of $5,000 and options to further develop their game with SmartML’s support to join Kawaiiverse, the central hub for Anime and Manga creators in blockchain. The gaming ecosystem is just the beginning of this metaverse and opportunities are opening for more interested developers to join. 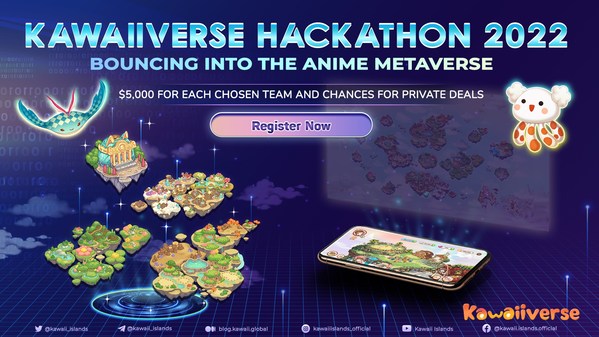 Kawaiiverse is a joint venture between Imba, a renowned game company with multiple successful games and Oraichain, the world’s first intelligent and secure solution for emerging Web3, scalable Dapps, and decentralized AI. Kawaiiverse started with Kawaii Islands, an anime-style farming game in 2021 with the vision to build an Anime Metaverse, where everyone can play, create, connect and earn. After several economy updates, Kawaii Islands is now running on a sustainable economy model, designed to protect their tokens from hyperinflation and solve one of the main problems of P2E games.

Along with the balanced economy, the Anime Metaverse now has its own subnetwork on Oraichain with full EVM and Cosmos support, the team is setting a strong foundation infrastructure for future development.

Determined to expand the gaming ecosystem, one of the core lines of Kawaiiverse, the developer team is now holding the project’s first ever hackathon. Calling for all independent game developers and indie game studios around the world to join, develop a prototype for the game of their choice and flourish along with the ever growing ecosystem.

Joining the Hackathon, the participating teams will stand a chance to take:

More details can be found from https://hackathon.kawaii.global/.

Teams of independent developers and indie game studios, prepare your idea, set up the prototype and get ready to join Kawaiiverse.