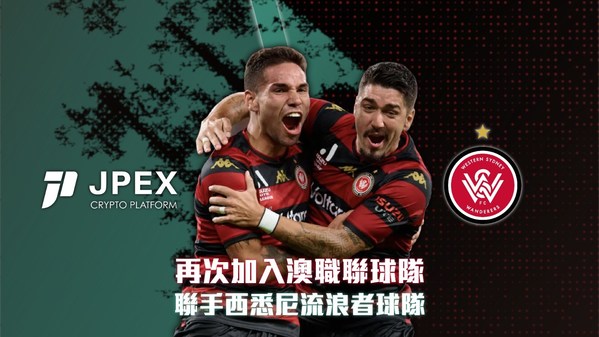 A partnership between a cryptocurrency exchange and a professional football team seems unrelated. However, it is nothing new to JPEX. It has twice partnered with Australian Football League teams, including Western United Football Club and Macarthur FC. JPEX is now co-operating with Western Sydney Wanderers FC and Scott Hudson, General Manager of Western Sydney Wanderers FC, said that he was delighted to see the co-operation.

With the rise of cryptocurrency, many institutions from various industries are expressing their desire to tap into the crypto industry. "We will continue to build our brand awareness in Asia and it’s our pleasure to have JPEX as part of the Wanderers’ family," said Scott Hudson. He added that he is looking forward to building a strong relationship with JPEX.

"We hope the Western Sydney audience will be eager to learn more information about cryptocurrency and NFT from us," said Vincent Le, General Manager of JPEX. "The team is actively building a large crypto community in Asia and Oceania, and in doing so, hopes to gain more exposure to launch more products in the future." Vincent continues.

JPEX was launched in July 2020 with its business focus in Asia. As a leading cryptocurrency exchange trading platform, JPEX hopes to establish its business to other industries. The co-operation with various football teams provides JPEX with an excellent opportunity to bring influences to various industries.

JPEX strives to becoming one of the world’s largest cryptocurrency trading platforms by providing the best services and high-quality experiences to users. Incorporated in Australia, JPEX will expand its footprints to Dubai, Malaysia and Taiwan.