The FC Barcelona Official Channel will include exclusive Barça content, bringing the Club closer to its fans in China

BEIJING, Sept. 15, 2020 /PRNewswire/ — iQIYI Sports (the "Platform"), a joint venture between iQIYI, Inc. (NASDAQ:IQ) ("iQIYI" or the "Company"), an innovative market-leading online entertainment service in China, and Super Sports Media, announced that it has entered into a strategic collaboration with FC Barcelona ("Bar?a") to create the first FC Barcelona Official Channel in China during the 2020/21 season. At present iQIYI Sports has the rights to La Liga until 2021, the 2020 European Cup and other major sports properties. 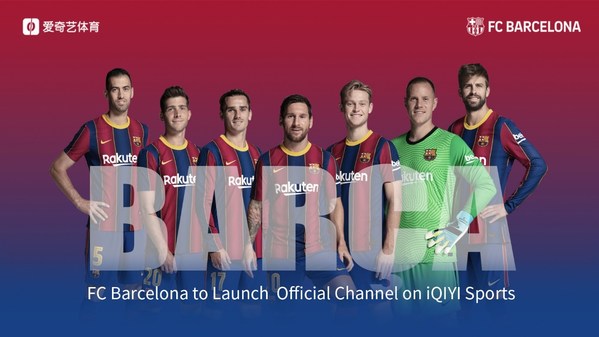 As the first La Liga club to launch a channel on the Platform, Bar?a will deliver diverse exclusive and non-exclusive video content to its fans in China, including behind the scenes access, training sessions, player challenges, interviews and keep fans up to date on the latest developments at the Club. It will also give behind the scenes access to the Bar?a B team training.

iQIYI Sports and FC Barcelona will continue to develop an in-depth cooperation and continuously expand the offering for Chinese Bar?a fans to bring them closer to Club.

Regarding this strategic cooperation with iQIYI Sports, Didac Lee, member of the board of directors of FC Barcelona and head of the Digital Area, said: "The Club is excited to be working with industry leader iQIYI Sports to adapt FC Barcelona content and give fans access to footage that was previously unavailable in China. This collaboration represents a step forward in our digital strategy as we become the first LaLiga club to launch a channel on the platform. The FC Barcelona Official Channel joins our existing social networks in China as we continuously strive to deliver engaging content and bring our Club closer to our fans in the region."

Regarding the achievement of this cooperation, Yu Lingxiao, CEO of iQIYI Sports, said: "Barça is one of the most popular and successful football clubs in the world. It has many loyal and enthusiastic fans in China. Together, it demonstrates iQIYI Sports’ determination to deepen content and market development around the world’s top football club’s IP. It also hopes to push FC Barcelona’s brand influence in China to a new height through cooperation. We will cooperate with the Club through technology and a variety of methods such as content operation, etc., and create more customized content for Chinese users, so that fans can learn about the latest developments of the team anytime and anywhere, and have a full range of content immersion experience."

Going forward, iQIYI Sports and FC Barcelona will deepen their partnership by expanding joint offerings in the interest of Barça fans in China. Fans can access the FC Barcelona Official Channel via the following link: http://www.iqiyi.com/kszt/fcbarcelona.html

As a leading sports video streaming platform in China, iQIYI Sports has always been committed to building a multi-dimensional content ecosystem to provide users with high-quality sports content. At present, iQIYI Sports holds a large number of top-tier sports properties including LaLiga, UEFA EURO 2020™, FIFA World Cup qualification-AFC, major tennis and golf tournaments, world-class fighting games and many other popular sporting events. In addition, iQIYI Sports is also dedicated to producing original high-quality sports programs to meet the personalized needs of pan-sports users and vertical sports users from different perspectives. In the future, iQIYI Sports will continue to innovate product technical forms and user interaction methods to provide a more customized experience to every sports fan on the platform.

FC Barcelona was founded more than 120 years ago in 1899 and is unique in many ways. The club is owned by its more than 145,000 members and can boast of being the most successful club in Europe over the last fifteen years. Since season 2004/05 they have won four of the Club’s five Champions League titles and ten of their twenty-six domestic league titles. Due to its very special personality, ‘Barça’ is recognized as being ‘more than a club’. The team’s distinctive style of play is projected around the world by the best players and coaches of their time in combination with club’s famous reliance on homegrown talent.

All of this goes hand in hand with its ongoing ambition to become the most admired, beloved and global sports institution on the planet. This mission is supported by such core principles as humility, effort, ambition, respect and team-work, while the club is also famed for its commitment to society, which is channelled through the Barça Foundation and its work to educate children through the positive values of sport. Such unstoppable growth in recent years has led to a global reach of more than 350 million fans and made FC Barcelona a world leader on social media.