SUZHOU, China, Jan. 7, 2022 /PRNewswire/ — The "first meeting of the New Year" was held in Suzhou, China on January 5, announcing that the regional GDP of 2.2 trillion yuan was expected to be completed by 2021. The gross industrial output value has historically reached the milestone of 4 trillion yuan. "4 trillion" is a figure in a leading position at home and even in the world. 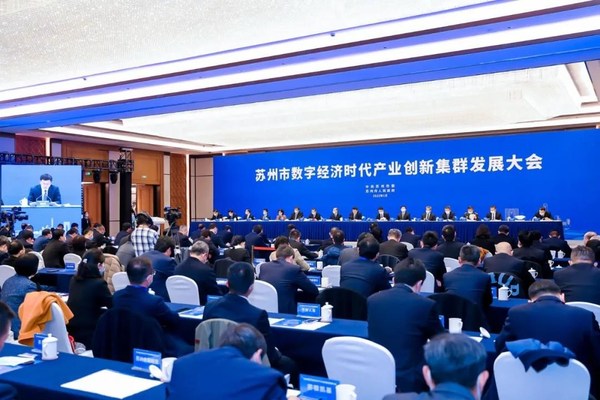 Press conference of the meeting

Suzhou has an important position and outstanding performance in the history of the policy of "reform and opening up", according to the Publicity Department of Suzhou Municipal People’s Government.

Cao Lubao, Member of the Standing Committee of the Jiangsu Provincial CPC and Secretary of the Suzhou Municipal Committee of the CPC, said, "The ancient characteristic of Suzhou throughout its 2,500 years of history is the culture of Jiangnan region, and more than 40 years of reform and opening up is the attitude of embracing the world, and entering a new era is the spirit of innovation. The development of digital economy is not only the general trend of a new round of scientific and technological revolution and industrial reform, but also an important way to promote the high-quality development of Suzhou."

The clear proposal of Suzhou to "cultivate and strengthen industrial innovation clusters in the era of digital economy" is to make greater contributions to the overall situation of China’s development.

Suzhou has the scale advantage of building innovation clusters. At present, it has formed 3-trillion-level industries of advanced materials, electronic information and equipment manufacturing. Cao Lubao said, "Under the overall planning and coordination of the government, all kinds of parks provide soil, finance provides water, policies are like sunshine, and public opinion is like air, forming a community of shared life that converges into an inexhaustible driving force for high-quality development and a distinct symbol of the city."

Caption: Press conference of the meeting