SHANGHAI, June 23, 2021 /PRNewswire/ — Investment guru Warren Buffett once said that investment is easier than you think, but harder than it looks. In fact, investment is about finding a balance between cash flow and risk management rather than financial management.

According to Harvest Capital founding partner and chairman Song Xiangqian, Harvest Capital has developed a logic-based investment model as a tool for evaluating investment. The model brings together three "targeted investment" principles: investing in growth industries, growth companies and outstanding entrepreneurs with innovative mindsets and who show themselves capable of learning and integrating new ways of doing things into their modus operandi.

This is reflected in Harvest Capital’s positioning as a lifestyle investment company. Since its founding 15 years ago, the company has been committed to investing in companies involved in the Chinese consumer goods and modern service sectors, covering the whole gamut of what makes up day-to-day living, including clothing, food, housing, travel, healthcare, education, entertainment and senior living. The company is seeking to build a portfolio network that covers 80 per cent of the needs of 80 per cent of 1.4 billion Chinese consumers while developing an understanding of the logic underlying the Chinese consumer market. By doing so, the firm seeks to create better lifestyles for Chinese consumers, with the aim of becoming the investor that has the closest relationship with them.

Targeting the consumer market is just the beginning of the whole investment journey. The next step is to identify outstanding players in the sector. According to the second investment principle, Harvest Capital generally invests in companies that are on track for future growth by virtue of extensive industry experience and strong business competencies.

Mr. Song believes that it is essential to invest in growth firms as, fundamentally speaking, investment is all about investing in the future rather than the past. "Past achievements of a company are just a testament to what has been done right in the past, but it remains unknown whether they can do it again or do it right in the future," he added. 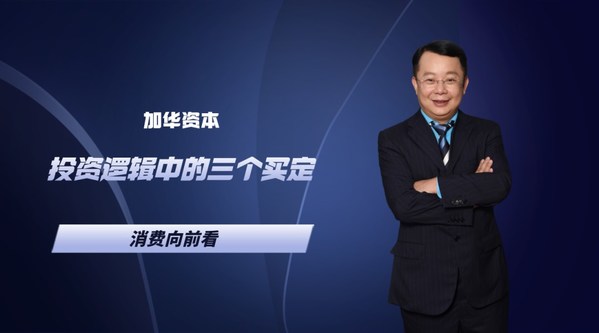 "The only thing that remains unchanged is change itself," once said Spencer Johnson, one of the world’s most famous authors and thinkers. Looking at the physics behind the statement, invariance refers to a static state while change itself refers to motion, reflecting the fact that motion is absolute while the static state is relative.

In the world of business, the continuous growth of the national economy has continued to boost consumer spending. Benefiting from the changes in consumer expectations and habits, Chinese food and beverage suppliers Chacha Food, Shanghai Laiyifen and Eastroc Beverage, as well as Chinese high-end lingerie maker Aimer Group have gradually become the leaders in their respective segments.

To take advantage of the opportunities brought about by the changes in consumption habits, Harvest Capital has targeted the best performers in the fast-growing sectors by leveraging its unique advantages. With that in mind, the firm has invested in several leaders in a number of sectors, including basic food staples, food and beverage, home decor as well as travel.

In China, most investment firms have built competitive advantages based on a large number of investments and probability-based investment strategies. In essence, none of them are able or have the time and willingness to invest for the purpose of empowerment and value creation.

With a unique investment strategy alongside its capabilities in supporting firms that are likely to become industry leaders, Harvest Capital has accumulated deep expertise in the professional investment domain. By taking a long-term unconventional approach to investment, the company has built competencies in solving problems professionally and effectively while creating a responsible and experienced investment team of professionals who work with entrepreneurs as co-founders and regard the organization itself as a key variable and growth driver. The unique investment strategy and outstanding performance are attributable to the high level of sunk costs, the concept of investing without focusing too much on the gains and losses, and the firm belief in the value of time, in addition to the ongoing commitment to long-term growth and returns.

As part of the full investment process, it is also extremely important to identify an outstanding entrepreneur to work with after the selection of a sector and a company operating in the sector.

A closed-loop logical process is created by investing in entrepreneurs as the final step of the process. Fundamentally, an investment is about investing in the matching between people and things, which involves a simple process of identifying a sector, a company in the sector and then an entrepreneur within the organization who has an innovative mindset and remains open and capable of learning new things and applying them.

With a focus on implementing an investment strategy that is firm in its long-term goal as well as both flexible and comprehensive in its approach, the three investment principles of Harvest Capital have come together to produce a chemical reaction that enables the company to grow substantially by creating new growth points.

"With this chemical reaction, we can truly deliver exceptional value over time by creating the Davis Double Play effect through investing in companies and helping them grow. As an established investment firm, we believe in the value of time," added Mr. Song.

"We are of the opinion that in China, only a few companies believe in the value of time and only a few entrepreneurs look at long-term development," indicated Mr. Song in an interview. "Although that belief is recognized by word-of-mouth, it is not something that is natural to human behavior."

In The Analects: Wei Zheng, the Master said, "If the people be led by laws, and uniformity sought to be given them by punishments, they will try to avoid the punishment, but have no sense of shame. If they be led by virtue, and uniformity sought to be given them by the rules of propriety, they will have the sense of shame, and moreover will become good." As a result, it can be said that people won’t have any sense of shame and become good if they don’t have virtue and propriety.

When it comes to looking for promising projects, Mr. Song explained, "In the business environment, there is supply on the provider side and demand on the consumer side. In particular, given the increasing demand in the market, we prefer to invest in players that create high quality products for young consumers."

Creative and innovative businesses that embrace market changes and offer consumer goods that cater to the needs of young consumers are expected to have more opportunities in the future. Mr. Song emphasized that Harvest Capital is willing to support these companies in growing their businesses by providing them with funding.

Good rain knows when the time is right and will fall when spring arrives. Taking Eastroc Beverage as an example, Harvest Capital has been a witness to each of Eastroc’s major milestones since 2017, when it invested in the beverage manufacturer three years after approaching the company early in 2014.

There is a big market even for "small" products. This was reflected in Harvest Capital’s investment strategy when it invested in Chinese fast food chain Home Original Chicken, as well as three listed companies that have delivered strong financial performance: Aimer, Chacha Food and Babi Food, in addition to the above-mentioned Eastroc Beverage.

"In the future, new fast-growing players can be expected to emerge in the consumer goods sector," noted Mr. Song. He believes that the elementary logic driving the sector remains unchanged while startups in the sector are more likely to succeed today by serving as growth engines.

Going forward, Harvest Capital expects to deliver stronger investment outcomes thanks to its philosophy of creating mutual benefits with an integrity-based investment strategy.