PARIS, April 20, 2021 /PRNewswire/ — With $1.6 billion hammered around the world in fine art auctions during the 1st quarter of 2021, the art market may look like it has already returned to a "normal" rhythm. True, the Q1 total is exactly the average Q1 total over the ten Q1 periods preceding the health crisis (2010 – 2019). But this impression, based on auction turnover alone, hides a very different situation from that which prevailed two years ago. 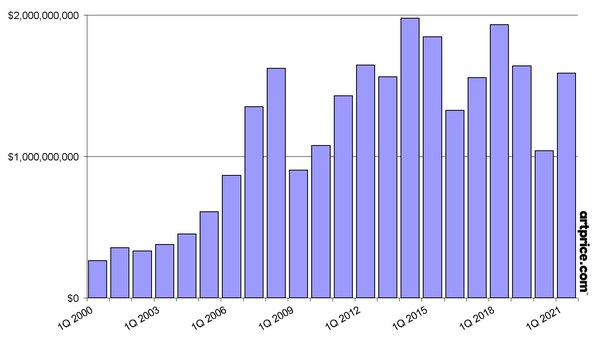 Fine art lots sold and unsold in Q1 auctions since 2000 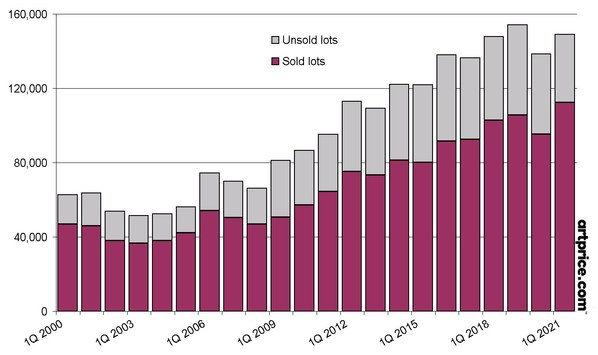 Fine art lots sold and unsold in Q1 auctions since 2000

thierry Ehrmann, President and Founder of Artmarket.com and its Artprice department, acknowledges that "it is still a little early to disentangle the effects of each of the powerful factors currently shaking the art market: Covid, Brexit, NFTs, etc. But their consequences are already visible".

Artprice is therefore redoubling its efforts to ensure continuous monitoring of the market’s most sensitive indicators and keep a close eye on its overall health. Artprice wishes to share the conclusions of its econometrics department in order to contribute to the market’s transparency.

1. A record number of transactions

Despite the logistical complications linked to the health crisis, fine art auction transactions have never been as numerous as in Q1 2021. In total, 112,200 lots were sold around the world, i.e. 6% more than in Q1 2019 (105,600 lots sold). The digital transition undertaken by the major auction houses has enabled the emergence of an online market that is particularly suited to the middle market.

An key indicator of the balance between supply and demand in the market, the unsold rate varied only very slightly over the period 2010-2019, fluctuating between 31% and 34%. In other words, the art market has become accustomed to seeing a third of the lots offered for auction fail to reach their reserve prices. But in Q1 2021, only one in four sales (25%) failed: demand is therefore increasing a little faster than supply!

Q1 turnover figures are usually dominated by London, which hosts the first prestige sales of the year. In 2021 the agenda had to be postponed by several weeks but nevertheless went ahead. However, the dominance of the UK capital appears weakened: London accounted for 37% of global sales revenue in Q1 2021 versus 48% in Q1 2019. New York, which managed to generate 27% of the global turnover in the first three months of the year, appears to be the main beneficiary.

The sale of Beeple’s NFT Everydays marked the start of a possible revolution on the art market. The work was purchased for $69 million in a Christie’s online auction using the Ether cryptocurrency. Indeed, this new market appears to have become even more ‘intangible’ since Sotheby’s generated $16.8 million by selling "The Fungible Collection", a digital work offered online in unlimited quantities and created by the anonymous and mysterious Pak.

Since the end of 2020, art auctions around the world have hammered some surprising results for extremely recent works. Journalist Scott Reyburn (in The Art Newspaper) cites, as an example, Christie’s "20th Century: Hong Kong to New York" sale on 2 December 2020 and says he was surprised to see Dana Schutz’s canvas Elevator (2017) fetch $6.5 million and Andy Warhol’s "classic" Campbell’s Soup Can (1962) sell for just $6.1 million (especially as the latter reached $7.4 million in 2014). Reyburn concludes that the arrival of new collectors, in search of the latest novelties ("red-chips") is overtaking the desire to possess "blue-chip" artworks.