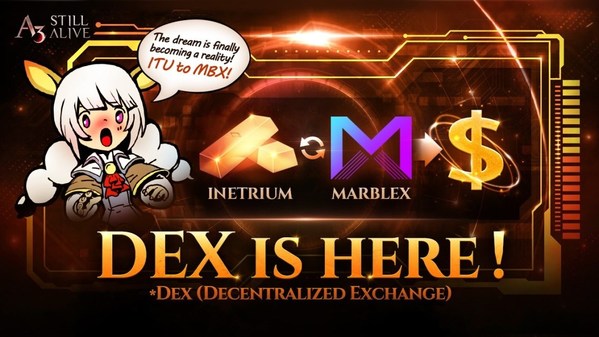 The introduction of the MARBLEX Wallet DEX Service feature to A3: Still Alive now allows players to convert Inetrion Ore, an in-game currency, into INETRIUM, MBXL, and MBX, as well as convert to the public currency for real life transactions.

To obtain Inetrion Ore, players will need to visit the Inetrion Dungeon (Tiers 1-3) and use Radienne’s Protection to defeat the Inetrion Monster. After collecting more than 200,000 Ore and linking the MARBLEX Wallet with the INETRIUM Refinery, players can convert the Ore into INETRIUM based on the day’s exchange fee, with a percentage of currency used for conversion. Through the MARBLEX Wallet DEX Service, INETRIUM can then be used to buy and sell MBXL and can be converted to MBX to make live transactions to purchase KLAY.

To celebrate the update and launch of the MARBLEX Wallet DEX Service, along with a new game server addition, new in-game updates will be made by the end of the month – Soul Runner (mount), Relic, and Awaken Character will be added to advance the combat power. Extradimensional Gallery and new Guild Boss will also bolster players’ experiences in dark fantasy of A3: Still Alive. Additionally, Inetrion Express and EXP Bonus-time Events for a new server will allow players to quickly and efficiently reach Lv. 190.

Additionally, a number of events are prepared for the fans, who have converted MBXL to INETRIUM throughout May 10.

Details regarding the events can be found at the official Forum here.

Set in an apocalyptic fantasy world of swords and sorcery, A3: Still Alive is a cross-genre mobile experience that pairs the enormous and living worlds of Open-World RPGs with the extreme combat of Battle Royale. Players must be vigilant in an always-open Player vs. Player (PvP) environment as they fight against enemies with intense hack & slash combat and prove their mettle in a variety of PvP and Player vs. Environment (PvE) modes. A3: Still Alive is beautifully rendered with splendid console-quality 3D graphics that are brought to life thanks to the outstanding optimization of the Unity Engine.