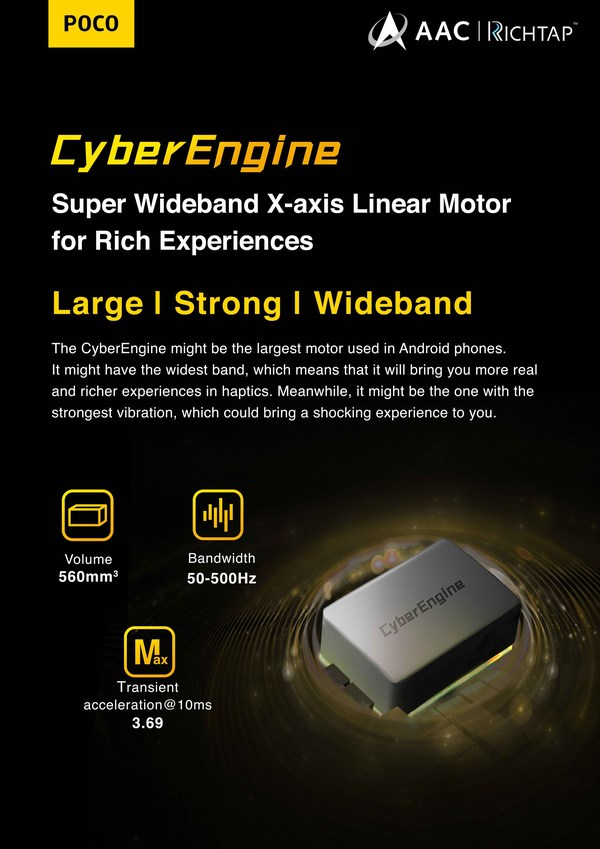 Most importantly, CyberEngine is the first X-axis linear motor in the Android space that can achieve F0 at 130Hz, matching leading smartphones like the Apple iPhone 13. Each type of linear motor is created with a fixed hardware parameter: F0. This describes the resonant frequency of the internal spring of the motor, while the resonant frequency F0 of the original motor in the industry is 235 Hz. This comfortable frequency has been continuously tested and verified by the industry, with a haptic feedback setting F0 to 130Hz making the overall experience the most comfortable in the industry by far.

Aside from the hardware, renowned gaming title Free Fire has now added new exciting vibration functionality?allowing gamers to use the CyberEngine to experience nearly a hundred kinds of vibration effects in scenes such as gunshots, vehicles, and prompts. In any chaotic battle scene, you sometimes don’t know if you are under attack. The CyberEngine vibration function allows players to intuitively feel that they have been shot through the vibration of their fingertips, allowing players to know that they are really firing upon opponents. The high-intensity and short-duration high frequency vibration effect even can also simulate the characteristics of rapid-fire rate, multiple bursts, and the strong firepower of an assault rifle. Game on!

CyberEngine is a truly powerful haptics engine that engages people’s sense of touch to enhance the experience of gaming and interacting with onscreen interfaces. Based on X-axis linear motors, haptics is becoming more and more important. With technologies like AAC’s CyberEngine, more mobile games will rely on haptic feedback technology to bring players an even more immersive interactive experience.