SYDNEY, Oct. 13, 2021 /PRNewswire/ — Australian IT departments are under huge strain to deliver on an unsustainable backlog of digital transformation projects, according to new research conducted by The Economist Intelligence Unit and sponsored by Appian. 85% of tech leaders report that growth in business project requests dwarfs IT budget growth. This is significantly higher than the global response of 64%, showing that the discrepancy between budget and demand is much more pronounced in Australia than in the rest of the world. 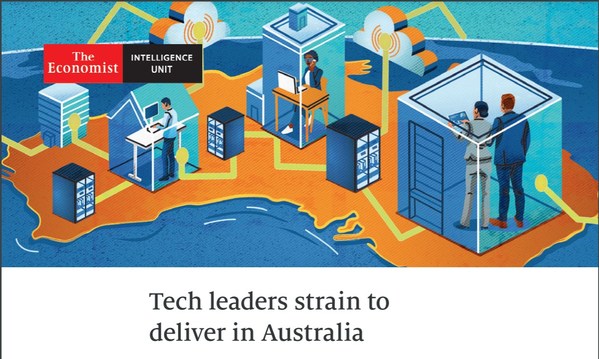 Australian IT departments are under huge strain to deliver on an unsustainable backlog of digital transformation projects, according to new research conducted by The Economist Intelligence Unit and sponsored by Appian. 85% of tech leaders report that growth in business project requests dwarfs IT budget growth.

Adding to IT’s dilemma, the research suggests that four in five business leaders believe that their organisation needs to improve its IT infrastructure and applications in order to better adapt to external change. The data shows that most Australian executives (89%) believe that their organisation encountered operational difficulties in addressing the challenges posed by the pandemic, with 41% describing these as significant.

"Prior to the pandemic, IT teams in Australia were already under enormous pressure and struggling to keep up with the software application demands of businesses," said Luke Thomas, Regional Vice President APAC at Appian. "With the additional pressures of COVID-19, which made employees, business data, and IT systems more dispersed than ever before, it’s no surprise that four in five Australian business leaders believe their organisation needs to improve IT infrastructure and applications in order to better adapt to external change."

The trend towards non-IT-led application development is evident at BUPA Australia & New Zealand, whose CIO, Sami Yalavac, was interviewed as part of the research. BUPA puts together teams that focus on core services for each part of the business and take responsibility for the technology that delivers those services rather than rely on IT.

"You simply can’t be agile if you have this traditional model of people in the business setting requirements and people in IT trying to fulfil those requirements without really understanding the reason for them or what the end goal is," Mr Yalavac said in the report.

"What you get then is IT working hard, only for people in the business to turn around and say, ‘That’s not what we meant’, or ‘It doesn’t work the way we thought it would’. These conversations can go backwards and forwards for months, and all the time, customers are still waiting, and employees can’t get work done effectively."

The importance of collaboration, and the data problem

More than three-quarters (77%) of Australian business leaders regard their IT colleagues as highly effective in collaborating on new product development, a sentiment reflected by 66% of IT decision makers.

Data accessibility, however, is a major hurdle for Australian businesses trying to bring new transformational solutions to market. 71% of Australian business leaders report they have had to cancel a digital business project due to lack of the right data. This is much higher than the global average of 54%.

"The research did highlight that Australia’s geographical distance from other markets gave its businesses a head start when it came to connecting distributed workforces amid the pandemic. However, if enterprise data remains locked in siloed systems, better solutions for the distributed organisation will be difficult to deliver. If IT decision-makers in Australia are going to have a chance of meeting businesses’ ever-growing appetite for digital applications in the future, they will have to embrace new approaches to development that overcome the data problem," Luke added.

To learn more, download the "Tech Leaders Strain to Deliver In Australia" report, and talk to Appian about how low-code automation accelerates IT and improves business collaboration, performance, and resilience.

About the Report
"Tech leaders strain to deliver in Australia" is a survey-based article, with findings drawn from a twin survey of IT decision-makers and senior business executives at major corporations, conducted by The Economist Intelligence Unit in May and June 2021. The 1,002 respondents represent six sectors (financial services, insurance, healthcare, the public sector, oil and gas, and energy and utilities) and nine countries (the US, Canada, France, Germany, Italy, the Netherlands, Spain, the UK and Australia). A third are C-level executives and the remainder work at the director level or above. Half of the respondents work in organisations with annual revenues of over US$1bn. The report supplements the survey findings with secondary research and in-depth interviews with experts. This article focuses on the survey results and in-depth interviews from IT decision-makers and senior business executives at major corporations in Australia.