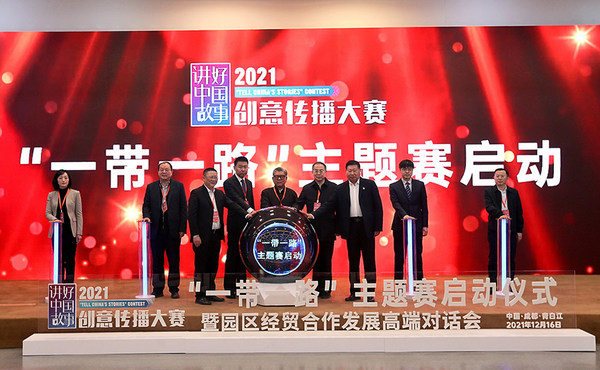 The 2021 Tell China’s Stories Belt and Road Initiative (BRI)-themed contest launch ceremony and High-level Dialogue on Economic and Trade Cooperation and Industrial Park Development event were held on Dec. 16, in Qingbaijiang district, Chengdu city, Sichuan province. The solicitation is hosted by China International Publishing Group and under the guidance of the State Council Information Office. It is designed to collect quality stories about the effects of the BRI on economic integration, cultural inclusiveness, people-to-people communication, and the global community and its shared future, and is open to BRI countries and regions and the individuals, enterprises, and other organizations within them.

Wang Lin, head of Qingbaijiang district and deputy secretary of its Party committee, noted that the administrative area is the only free trade zone based on a railway port in China and is the origin of the China-EU rail line in the speech he gave at the event. He mentioned that the district has seized the opportunity that the BRI and the Chengdu–Chongqing economic circle have provided in recent years by building an international railway network and a freight distribution system that covers land and sea and that this endeavor has enabled it to achieve a historic transformation from an inland hinterland to an open hub. Wang also stated that Qingbaijiang has been accelerating construction of a BRI communication center and will continue to contribute more and better Chinese stories.

Zheng Wenhua, deputy Party secretary of China Internet Information Center (CIIC),observed that the BRI has been constructing a bridge that connects China and the world in its eight years of existence and this has led to the East Asian nation becoming more closely and more deeply connected with the other countries that are involved and remarked that the mutual consultation, co-development, and sharing that is occurring is leading to the creation of a new open and win-win-oriented international cooperation framework in his speech. He observed that the initiative is resulting in touching true stories that connect people and cultures being written and mentioned that he hopes that people from all walks of life will participate and that sincere friendship will be forged in the course of the exchanges and cooperation that are occurring.

Zhu Hongren, deputy head and director general of China Enterprise Confederation (CEC) and China Enterprise Directors Association (CEDA),stressed that China-EU railway is an important mode of trade and transportation between China and Europe in the keynote speech that he gave during the High-level Dialogue on Economic and Trade Cooperation and Industrial Park Development. He noted that Chengdu International Railway Port and Qingbaijiang district have made great efforts to build a major pan-European, pan-Asian land port hub and that it is a highlight of Sichuan province’s opening-up campaign that helps it connect with the rest of the world. Zhu added that attention should be paid to the new challenges posed and opportunities presented by the development of China-EU rail and emphasized that the trains are environmentally friendly and promote the stability of industrial chains and supply chains, improve synergy between them, and give people the opportunity to strengthen control over them.

A total of 35 entries were recognized at the event as well. Five first prizes, 10 second prizes, and 20 third prizes were awarded, and 8 organizations received other honors.