PALO ALTO, Calif., Jan. 13, 2022 /PRNewswire/ — Zendure, a charging technology brand based in California, set up camp in the Las Vegas Convention Center’s Central Hall for CES 2022. The primary focus of their camping-themed booth was showing off SuperBase Pro 2000, a power station that raised over $1.3 million USD in a recent fundraising campaign. The company also demoed two new products that hadn’t been announced yet: Passport III, a compact and colorful 65W travel adapter; and the M Series, a line of whisper-quiet power stations with a sleek metal enclosure. The new products drew the attention of many journalists, industry experts, and influencers, including AppleInsider’s Andrew O’Hara, and Brian Tong, the host of CES 2022. 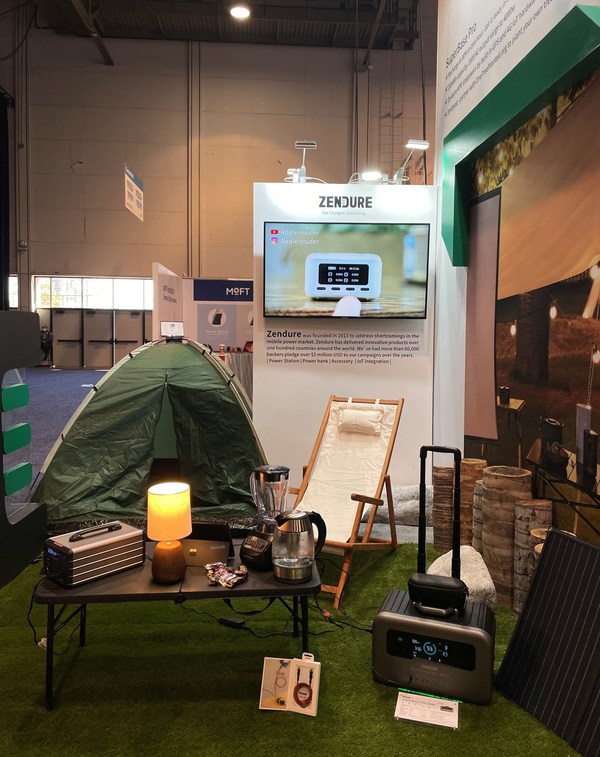 The primary focus of Zendure’s camping-themed booth was showing off SuperBase Pro 2000, a power station that raised over $1.3 million USD in a recent fundraising campaign.

Zendure is leaning heavily on the outdoor market for their new products, as evidenced by the artificial grass floor and woodsy backdrop of their booth. The design of their exhibit was influenced by a unique aspect of their SuperBase Pro power station. The power station’s companion app has a feature called "ZenForest", which is a semi-virtual garden that grows when the user employs green energy. As the user’s ZenForest grows in the cloud, real trees are planted around the world on the user’s behalf, with the help of One Tree Planted.

Many visitors to Zendure’s booth were already familiar with SuperBase Pro from the enthusiastic media coverage and the success of its recent crowdfunding campaign, but Zendure had a couple surprises in store. Passport III is the brand’s new travel adapter that’s smaller and has more output ports than its predecessors. Equipped with GaN technology, the new travel adapter can output up to 65W and charge up to six devices with its universal AC output, four USB-C ports, and a USB-A port. Passport III’s self-resetting fuse and press-and-slide controls are familiar features of the Passport product line, but this latest installment comes in three fun colors, sporting a metallic ombre faceplate and semi-transparent enclosure.

SuperBase Pro wasn’t the only power station exhibited by Zendure at the show. The brand took the opportunity to announce and demonstrate the M Series. The forthcoming power stations are smaller and lighter than SuperBase Pro 2000, and are poised to become the quietest power stations on the market, thanks to their fanless design. The M Series stations rely on efficient energy conversion technology and a metal exterior to manage heat without the need for active heat dissipation. In early testing, the new power station’s noise output was measured below 30Db while in operation. This is about the same amplitude as a whisper. Other brands typically put out about 60Db of noise at the same distance. As the decibel scale is logarithmic, 30Db is essentially a thousand times quieter than 60Db.

Zendure is an outdoor consumer electronics company located in Silicon Valley in the United States and the Guangdong – Hong Kong – Macao Greater Bay Area in China. Since its establishment, Zendure has continuously launched innovative products, made rapid breakthroughs in the core technologies of outdoor energy storage and power supplies, and continues to bring pleasant surprises to the user experience. The company recently received a multi-million dollar series-A round of funding from a joint investment from Shanghai GP Capital and YOTRIO group.