BEIJING, Dec. 1, 2020 /PRNewswire/ — Nanning, capital city of South China’s Guangxi Zhuang Autonomous Region, has been working together with other port cities in Guangxi, deeply integrating into the Belt and Road Initiative, actively participating in the construction of the new western sea-land transportation channel in a bid to embrace the world. 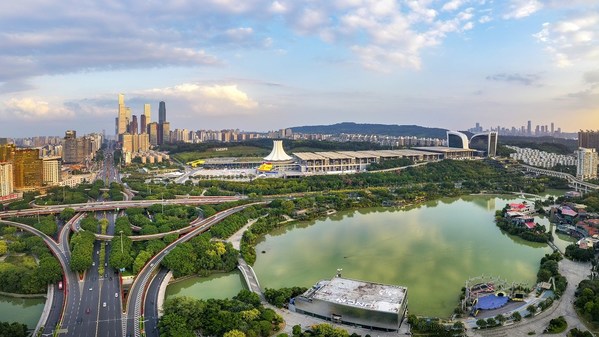 In the first 10 months, the bilateral trade volume between China and the ASEAN reached 3.79 trillion yuan, accounting for 14.6 percent of China’s total foreign trade value. China and ASEAN have become the largest trading partners of each other. Nanning, the frontier and hub city of China’s opening-up with ASEAN, has drawn attention from the world.

"A large number of cross-border e-commerce goods are sold to the ASEAN market through our port," said Wang Qiyun, a staff member of the administrative committee of Chongzuo Area of China (Guangxi) Pilot Free Trade Zone.

In recent years, Nanning has actively explored the new model of "cross-border e-commerce plus international multimodal transport." The road transportation channel of China–Vietnam cross-border e-commerce has realized normal operation. The construction of Nanning International Railway Port has been accelerated. More and more domestic products are exported via "Nanning Channels."

Meanwhile, the new western sea-land transportation channel has connected the western part of China with the Pan-Beibu Gulf region.

Xie Yunqiang, deputy director of the logistics department of Guangxi Iron and Steel Group, introduced that the company’s iron and steel base in Guangxi’s Fangchenggang City, has 14 supporting terminals, with an annual capacity of over 40 million tonnes. With 19.24 kilometers of supporting railway lines, terminals are directly connected with steel plants.

Besides, the railway container central station in Guangxi’s Qinzhou was officially put into operation in June last year. Thanks to the preferential policies, logistics costs between the port and railway was effectively reduced by more than 30 percent.

Thanks to the new western land-sea transportation channel, China (Guangxi) Pilot Free Trade Zone and the construction of an open financial gateway to ASEAN, Nanning is embracing the world and giving a full display of "Nanning Channels".