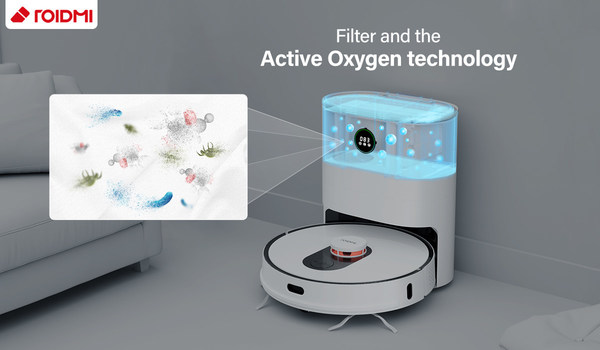 The self-emptying robovac has been gaining favor for automatic dust disposal, the greatest convenience a robovac could ever provide. But the longer it stores waste, the better chance microbes grow. Xiaomi ROIDMI Eve Plus now offers a head-on solution.

Sterilization may be a fundamental for self-emptying robovacs. The dust disposal station has room for 30 to 60 days of waste, which makes it a microbe hotbed capable of great damage. That’s why sterilization comes as an urgent need. Luckily, ROIDMI saw this: a qualified hassle-free robot vacuum should be one that cleans well, empties itself, and sterilizes itself. With this idea in mind, ROIDMI team developed the first disposal station with a built-in ‘deodorizing-particle generator’ that kicks off after each auto disposal.

The deodorizing-particle generator wipes out 99.99% of bacteria, viruses, parasites and smelly matter with HEPA filters and Active Oxygen tech that is often used for medical equipment sterilization.

The deodorizing particles invade these microbes and destroy them from inside out or oxidize the enzymes they live upon, be it common parasites (such as mites) or bacteria (like Escherichia coli, Candida albicans and Staphylococcus aureus). And these active oxygen particles can also oxidize chemicals, such as ammonia, formaldehyde, benzene and TVOC.

Xiaomi ROIDMI Eve Plus has every right to brag about its dust disposal power. With the 379mm short rear disposal duct, 900W powerful motor and 23,000pa suction, it can empty the robot quickly. The 3L large disposal bag can hold up to 60 days, and the LED touch screen makes it fun and interactive by showing users the dust disposal and sterilization process, and reminding users to change the bag once it’s full.

The robot can pick up waste easily with the 2,700pa suction. It’s equipped with LDS 4.0 laser navigation system that guarantees precise positioning, built-in ROIDMI smart mapping system, and an app to customize cleaning plans. It’s compatible with Mi Home, Alexa and Google Assistant. And it runs up to 250 minutes after one full charge.