Xi Jinping, general secretary of the Communist Party of China Central Committee, delivered an important speech at a grand gathering celebrating the centenary of the CPC’s founding at Tian’anmen Square in Beijing on Thursday. 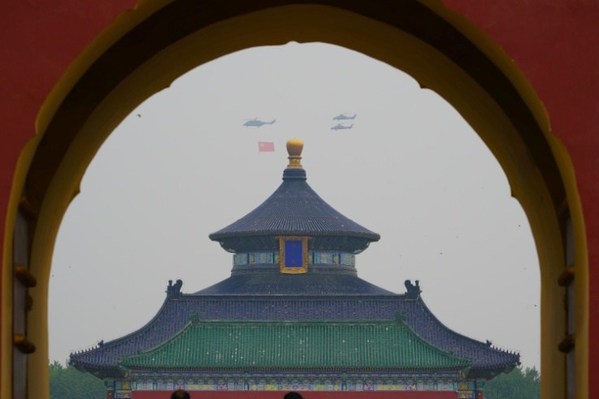 1 Helicopters carrying the Party flag fly over the Temple of Heaven in celebration of the centenary of the CPC in Beijing on July 1, 2021. [Photo by Su DongFor China Daily]

A 100-gun salute was fired in the morning, representing the 100 years of the Party. A national flag-raising ceremony was held. A congratulatory message jointly issued by eight other political parties, the All-China Federation of Industry and Commerce, and personages without party affiliation was read out at the ceremony.

Here are some highlights from Xi’s speech:

– China has realized the first centenary goal — building a moderately prosperous society in all respects.

– The CPC has united and led the Chinese people over the past 100 years for one ultimate theme — bringing about the great rejuvenation of the Chinese nation.

– The Party unites and leads the Chinese people in fighting bloody battles with unyielding determination, achieving great success in the new democratic revolution.

– The Party unites and leads the Chinese people in endeavoring to build a stronger China with a spirit of self-reliance, achieving great success in the socialist revolution and construction.

– The Party unites and leads the Chinese people in freeing the mind and forging ahead, achieving great success in reform, opening-up and socialist modernization.

– The Party unites and leads the Chinese people in pursuing a great struggle, a great project, a great cause and a great dream through a spirit of self-confidence, self-reliance and innovation, achieving great success for socialism with Chinese characteristics in the new era.

2 Xi Jinping delivers a speech at a grand gathering celebrating the centenary of the CPC’s founding at Tian’anmen Square in Beijing on Thursday, July 1, 2021. [Graphic by chinadaily.com.cn]

– Seeking happiness for the people and national rejuvenation has been Party’s aspiration and mission since founding.

– By pursuing reform and opening-up, a crucial move in making China what it is today, China has caught up with the times.

– The CPC and the Chinese people, through a tenacious struggle, have shown the world that China’s national rejuvenation has become a historical inevitability.

– The people are the true heroes, for it is they who create history.

– The great founding spirit of the CPC is the Party’s source of strength.

– China’s success hinges on the Party.

– The firm leadership of the CPC must be upheld.

– The Party will continue leading Chinese people toward a better life.

– The Party must continue to adapt Marxism to a Chinese context. At the fundamental level, the capability of the Party and the strengths of socialism with Chinese characteristics are attributable to the fact that Marxism works.

– The Party must uphold and develop socialism with Chinese characteristics.

– The Party must continue self-reform.

– China will elevate its armed forces to world-class standards so that we are equipped with greater capacity and more reliable means for safeguarding our national sovereignty, security and development interests.

– China is committed to "one country, two systems" in governance of Hong Kong and Macao.

– Resolving the Taiwan question and realizing China’s complete reunification is a historic mission and an unshakable commitment of the Communist Party of China.

– All Chinese people, both at home and overseas, can focus their ingenuity and energy on the same goal and come together as a mighty force for realizing national rejuvenation.

– The Party is still in its prime, determined as ever to achieve lasting greatness for the nation.

– Chinese young people should carry on the mission of national rejuvenation.

3 Xi Jinping delivers a speech at a grand gathering celebrating the centenary of the CPC’s founding at Tian’anmen Square in Beijing on Thursday, July 1, 2021. [Graphic by chinadaily.com.cn]

– Any attempt to divide the Party from the Chinese people or to set the people against the Party is bound to fail.

– The time in which the Chinese nation could be bullied and abused by others is gone forever.

– China welcomes helpful suggestions, but will not accept sanctimonious preaching.

– Chinese people will never allow any foreign forces to bully, oppress or subjugate us.

– China will keep promoting community with shared future for mankind.

– China is committed to world peace, development and order.