HO CHI MINH CITY, Vietnam, Jan. 5, 2022 /PRNewswire/ — The investment round is led by Square Peg, a leading global VC firm whose investments include unicorns such as Canva, FinAccel and Airwallex. Other participants are Jungle Ventures, Granite Oak, FinAccel, Phoenix Holdings (existing investor) and other super angels. 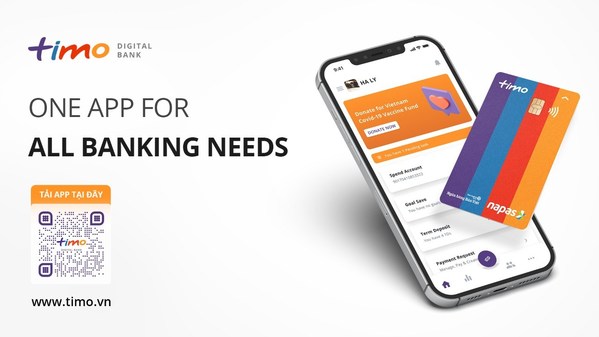 How Timo is redefining banking in Vietnam

Established in 2015, Timo is Vietnam’s first digital bank and has steadily evolved to become the country’s leader in digital banking. In 2019, the bank announced a strategic partnership with Viet Capital Bank, further accelerating its growth.

Timo – which stands for Time and Money – has consistently emphasized customer-centricity at its core. The company is widely recognized as being one of the first banks in Vietnam to offer eKYC services. Operating in a country where banking adoption rate is still relatively low, this helps customers save time during on-boarding and allows them to access other banking services online faster through its platform. More recently, the company has been accelerating its vision of social banking, recognizing that banking and financial services always are embedded in a broader context.

Securing the backing of Square Peg

With over US$1 billion in assets under management, Square Peg has backed category-defining companies including Southeast Asian fintech giants like Kredivo, StashAway and Pluang. Square Peg’s mission is to empower exceptional founders, and has invested over US$200M in Southeast Asian startups.

Tushar Roy, Square Peg Southeast Asia Partner said: "We have been impressed by the Timo team’s vision to transform banking in Vietnam. In a market with almost no other independent, digital-native players – Timo stood out from the crowd. It is a mission-oriented team aligned around creating beautiful experiences for customers and bringing more people in Vietnam into the financial ecosystem. We are excited to support Timo on its journey."

Henry Nguyen, CEO Timo Digital Bank said: "This funding round is not only a signal that digital banking is the future in Vietnam, but It also demonstrates investors’ confidence that Timo is leading this important sector. We are deeply committed to our mission of setting the benchmark for modern banking in Vietnam while bringing greater financial inclusion and accessibility to the large majority of the population which remains unbanked. Timo aims to become the bank that is at the center of our customers’ financial lives. We are delighted to have world class investors led by Square Peg joining us on our journey."

Square Peg is a global investment firm on a mission to empower exceptional founders. With teams in Singapore, Israel and Australia, Square Peg invests in emerging technology companies across the internet economy. Square Peg has over US$1 billion in assets under management across multiple funds and has invested in category-defining companies including Fiverr, Canva, PropertyGuru and Airwallex. Since 2013, Square Peg has invested over US$200m in Southeast Asia in companies including Pluang, Stashaway, DoctorAnywhere and Neuron Mobility. In 2021, Square Peg expanded into global listed equities, with the launch of the Global Tech Fund.

Timo is Vietnam’s very first digital banking platform which has rapidly developed over the past six years and become the country’s No.1 digital bank. Timo’s commitment to continuous innovation and its customer-centric approach have positioned it a true digital banking pioneer and as a leader in redefining modern banking services in Vietnam and beyond. In the past several years, Timo’s efforts have been recognized through many honors inside and outside of Vietnam including being named in the Top 50 FDI Enterprises in Vietnam 2021 as the "Leading Digital Banking Platform in Vietnam" by the Golden Dragon Awards and "Best Digital Bank in Vietnam 2021" voted by International Business Magazine. www.timo.vn