TRI TON, Vietnam, Sept. 19, 2022 /PRNewswire/ — Across Vietnam’s Mekong River delta, drones flying above the field to perform farm works have been gradually adopted in the rice paddies. Vietnam becomes one of the fast-growing markets for XAG Agricultural Drone, helping farmers address labor shortage and reduce costs. In the meantime, drone pilot is seen as the new favored career for rural youth, who can harness technology to make a good fortune in the agriculture sector. 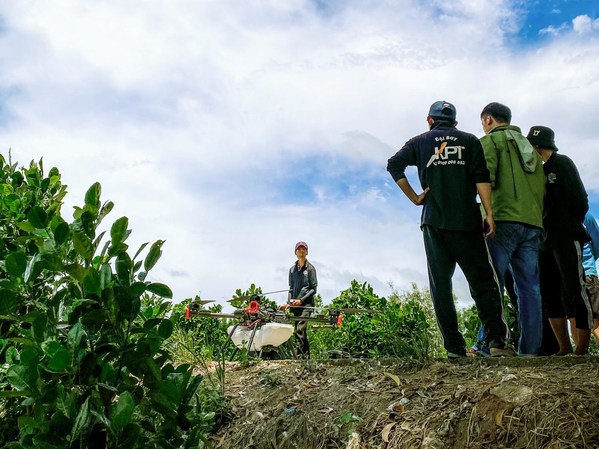 Nhan, a farmer who owns a 70-hectare rice field in the Bac Ninh Province, used to suffer from unstable yield and profit decline. He was not content with the performance of manual spraying that was costly and inefficient. As the cost of hiring workers had posed great pressure on his livelihood, he ordered services from KPT Fly Team to help him cultivate rice with XAG’s drone.

"Before approaching us, Nhan hired 20 to 25 workers to spray pesticides manually, but this often led to uneven spraying and waste of chemicals. Now because we have the tool of preventing pests more effectively, our team becomes his first option to reap harvest," said by 30-year-old Khuong, KPT’s co-founder.

"With two XAG P100 agricultural drones, two small teams consisting of only 4 to 6 people can finish the fieldwork much faster and easier. While the drone sprays evenly and penetrate the rice crops more quickly, it can also spread seeds and fertilizers. Our service has helped him reduce labor cost and improve the yields."

According to the World Bank, employment in agriculture in Vietnam has fallen from 65% to 36 % over the last two decades. Young people in rural areas have been moving to the city for more decent job. In face of rural aging, farmers complain that it is getting more difficult to hire workers to manage their rice fields.

The introduction of agricultural drone has changed the tune of young generation on rural development. It provides a decent work opportunity for rural youth who can build a new type of business like the KPT Fly Team or join as a drone pilot. They have become the new rising force to strengthen Vietnam’s role as ‘rice bowl’ of the world.

The key to win farmers’ trust

The KPT Fly Team was established in 2021 by a group of young engineers with experience in rice cultivation. They provide services to farmers in the Mekong River delta, using XAG’s drones to handle pests, sow seeds, and spread fertilizers.

Seeing the great potential of drone business in Vietnam farming is the main reason why Mr. Khuong and his counterparts established KPT. The shortage of manual labor, the high price of hiring workers, as well as the increasing cost of fertilizers and pesticide have prevented rice farmers from improving productivity. The output is unstable, and the profits farmers can receive seem to depend on luck.

The ideal income has also been attracting young people to step into this new career. According to Mr. Khuong, during the busy farming season, a drone pilot can earn 20.4-23.8 million VND monthly, far higher than the average salary in countryside and even in city.

Since started, the KPT has grown to a team with 4 founders and 16 operating pilots and served over 5,000 hectares of rice fields. "The XAG P100 drone makes us more confident in our effectiveness. Its 40kg payload enables operation at a larger scale. Simply setting parameters on the mobile app, the drone can do its work autonomously with minimal human intervention," said Mr. Khuong.

However, promoting agricultural drone to the farmers has never been easy. Most farmers were used to spraying with a large amount of water and they doubted that drone is more effective in protecting crops with less water. To dispel farmers’ misgiving, the pilot team would carry out test flight and prove the efficiency of drone compared to manual operation. Calculations are made to show farmers the benefits of reducing waste and how this can save money for them.

"We commit to farmers that when our drones spray according to the amount of water we recommend, and if it is not effective, they will be compensated," Mr. Khuong said. As the results do not fail their expectation, the KPT team is gaining more trust as well as increasing customers.

XAG’s agricultural drone is well credited for the level of its automation and precision, but what impresses KPT the most is the company’s agricultural ecosystem. From remote sensing drone to unmanned ground vehicle, XAG has also developed multiple types of products to focus on farmer’s various needs. More technologies will be applied on farm to yield a bright future.