KUALA LUMPUR, Malaysia, Nov. 11, 2021 /PRNewswire/ — Wild Digital, the region’s premier tech conference powered by Catcha Group, is closing the year with its annual flagship Southeast Asia conference. Held for the 7th year running, the event is happening virtually on 9-12 November 2021, and will see an expected 100+ speakers, 40+ live sessions and 1200+ attendees over the four days. 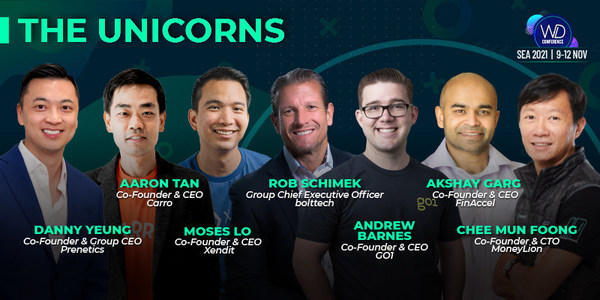 A few of the unicorns featured on Wild Digital SEA 2021’s speaker lineup—representing various verticals from automotive marketplace to fintech.

In recent years, Southeast Asia has shifted into innovation high gear to overtake global competitors in the region, thus reshaping and changing the rules of the game. This year’s theme—"Accelerating Southeast Asia—the Next Digital Powerhouse"—will herald new beginnings and reflect the changes we’ve seen in the industry as we adapt to a leading market that is paving the way for Southeast Asia’s post-pandemic boom.

"SE Asia is a hotspot of talent and we’ve seen so many local, regional startups and companies go big and go global, even despite the pandemic—proof of the grit and drive that our entrepreneurs here have. This is something that Catcha wants to nurture and we’ve been supporting the tech ecosystem since the early 2010s through a series of initiatives, among them, our annual flagship conference. What better way than to start something of our own that we can then grow for the community?" said Patrick Grove, Co-Founder and Group CEO of Catcha Group.

Main Stage program aside, we are organizing for the first time, an exclusive virtual #WomenInTech panel + networking session that will be happening during lunch break on Day 2, 1.00pm-1.40pm (GMT +8). Held via our virtual Rooms, the session is titled WOMEN INFLUENCING TECH: MENTOR HER FOR TOMORROW, and will feature:

Conducted in a more casual conversational format, this will allow for a candid take on the intersectionality between gender and opportunity and how our panelists are effecting change through their leadership. Attendees will also get the chance to interact directly with our panelists—think Clubhouse session—and help drive the conversation too!

After an intense selection round and over 100+ applications, 15 finalists from across Southeast Asia have been chosen to pitch at Startup Disruptor Arena (SDA)! These startups from Malaysia, Singapore, Indonesia, Vietnam and the Philippines respectively, represent various verticals from edutech to healthtech. The winner for this regional will be determined based on 100% judges score, with the winner announced on Day 4 of the conference (12 November).

Organised in partnership with Startup World Cup – which is helmed by Pegasus Tech Ventures, a Silicon Valley-based VC – SDA is opened to startups from any tech-related vertical and funding stages, headquartered in Southeast Asia. SDA also doubles as Startup World Cup’s SEA Regionals and the winner will go on to compete at the Grand Finale in September next year and stand a chance of winning an investment fund of US$ 1,000,000!

Find out more about the TOP 15 Finalists here.

HOW TO BE A PART OF WILD DIGITAL SOUTHEAST ASIA 2021

Head over to wilddigital.com to find out more about how you too can be a part of this year’s most exciting virtual conference yet!

Founded in 1999, Catcha Group is one of the most established internet groups in Southeast Asia. The Group’s vision is entrepreneurs first and they have been building and investing in disruptive technology companies around the world for more than 20 years, with a particular focus on Southeast Asia and Australia.

Since its inception, Catcha Group has completed over 70 corporate transactions, and brought six companies from their early stages to a public listing or sale, with an aggregate valuation of over US$1 billion. In February 2021, Catcha listed Catcha Investment Corp, a US$300 million Special Purpose Acquisition Company (SPAC), on the NYSE to merge with businesses in the new economy sectors. Most recently, Catcha invested in Carsome, Southeast Asia’s largest integrated car e-commerce platform and Malaysia’s first tech unicorn.

Since 2015, Wild Digital has been driving Catcha Group’s vision of supporting entrepreneurs by giving them a platform on Southeast Asia’s premier tech conference. Wild Digital’s extensive network of leaders, investors and chief executives allow attendees the opportunity to gain exclusive insights into the future of technology and digital creativity from the BEST of the BEST, all in one place.

Being part of Wild Digital’s ecosystem connects you with some of the best minds in the digital ecosystem – while the community collectively comes together to share their bold and wild visions for building great disruptive companies.