SAN MATEO, Calif., April 11, 2022 /PRNewswire/ — April is going to be an exciting month for kdrama fans. Viki presents a line-up of new and exclusive dramas that are sure to satisfy viewers of all ages. From Queendom 2 to Again My Life, viewers can watch the latest episodes online on Viki’s website. 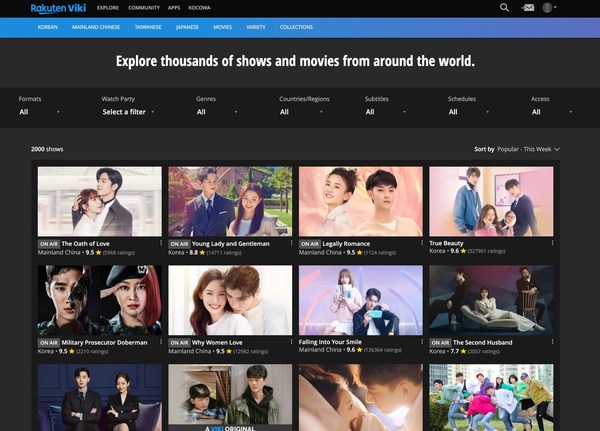 Starring Lee Joon Gi and Kim Ji Eun, Again My Life is a crime and mystery Korean drama that follows a hardworking prosecutor who gets killed while investigating a politician suspected of corruption. Kim Hee Woo (Lee Joon Gi) gets another shot at life and tries to discover the truth about what happened to him.

Viewers looking for a romance Korean drama to watch can look forward to Sh**ting Stars (Shooting Stars). Top star, Gong Tae Sung (Kim Young Dae), is viewed as a kind and polite young man in the public’s eyes. However, he has a different personality off-screen. As the PR team head, Oh Han Byeol (Lee Sung Kyung) always employs her excellent speech and crisis management skills to maintain Tae Sung’s image. Despite their endless bickering, the two gradually develops feelings for each other.

Another must-watch Korean drama is From Now, Showtime! starring Park Hae Jin and Jin Ki Joo. Park Hae Jin plays a famous magician, Cha Cha Woong, who is able to see ghosts. Go Seul Hae (Jin Ji Joo) is a passionate police officer that shares the same ability but is afraid of using it. With Hae Jin’s ghostly retinue, they start to work together to catch fiendish criminals.

Apart from these new Korean dramas, viewers can also watch Queendom 2, a Korean reality survival show that pits six all-female acts against each other in a series of musical challenges. Viewers can look forward to exciting performances as the competitors battle it out to win the crown.

Additionally, viewers can also watch Japanese dramas like Promise Cinderalla – now available on Viki. When her husband reveals that he has met another woman, Katsuragi Hayama (Nikaido Fumi) leaves the house only to be robbed of the money she has. Homeless and penniless, she meets Issei (Maeda Gordon). The bratty high school student offers her a place to stay, only if she plays a game with him.

Viki offers a wide range of genres, including romance, action and comedy. Viewers can watch shows for free or subscribe to Viki for an ad-free experience and be entertained anytime, anywhere. Dramas and movies on Viki are also subtitled in a variety of language options. Viewers can look forward to enjoying their favorite shows in English, French, Traditional Chinese and more.

Rakuten Viki is a premier destination for Asian entertainment, offering the best and most accessible selection of Asian movies and shows, including dramas, variety and award shows, and originals across many popular genres. Reaching more than 55 million fans in 190 countries, Rakuten Viki’s content is translated into 150+ languages by a community of avid fans. Viki, Inc. as well as Soompi, an entertainment news community, is a part of the Rakuten Group (TSE: 4755), a global leader in e-commerce and internet services that empower individuals, communities, businesses, and society.