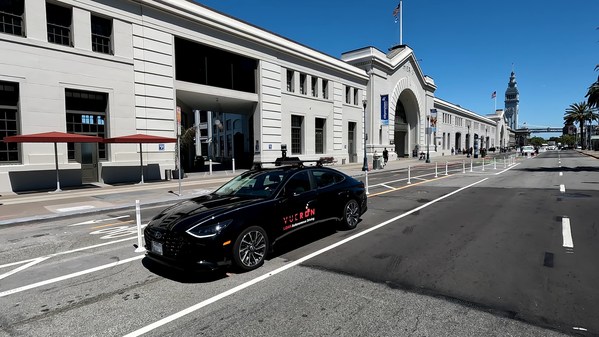 After that, it succeeded in driving 383 miles from Los Angeles to San Francisco via Interstate 5 and Interstate 580, for 6 hours at a maximum speed of 70mph. The safety driver who rode the vehicle for safety never held the steering wheel while a whole driving.

Generally, diverse sensors are used at the same time for autonomous driving, but Vueron has implemented self-driving by utilizing only one LiDAR sensor and has verified its solution through its self-driving tests in a variety of roadway conditions and environments.

The system of Vueron did not use any camera, radar, GPS, or HD Map, as it only implemented a self-driving system by using only one Spinning LiDAR sensor.

Next quarter, Vueron expects to unveil the next generation of LiDAR autonomous vehicle platforms that can be worked on immediately based on its experiences and technologies of LiDAR. Vueron will provide customers with an affordable price for many people rather than a high price and with a safer driving system through the LiDAR autonomous vehicle platform, which is about to be released in the near future.

Vueron is building the next generation of LiDAR autonomous driving solution, differentiated from existing technology. Established in 2019, Vueron has provided a solution that enables autonomous driving services based on the company’s AI technology and LiDAR. In 2020, it has already been the first in the world to obtain an autonomous driving permit with only one LiDAR sensor and prove self-driving services, and in 2022, it has obtained a self-driving permit by using one LiDAR sensor from the California DMV. Vueron is back by top-tier strategic partners and investors, including Naver(035420.KS), Korea Development Bank, Bonangels Venture partners, Daesung Private Equity(027830.KQ), and others. For more information, visit www.vueron.org.