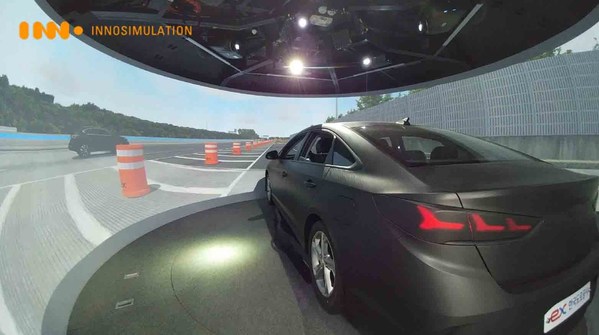 Recently, many VR devices are being distributed, but the more you are still immersed in VR content, the dizzier you are due to cognitive dissonance that your body feels by the body. However, the motion control system of INNOSIMULATION can accurately control movement so that passengers can feel straight or rotating movements based on mathematical models, and it relieves dizziness through harmony of the entire system such as video and sound motion.

INNOSIMULATION is a national research and development project in Korea, and it has a history of providing products and technologies to the Road Simulator Experiment Center currently operated by the Ministry of Land, Infrastructure and Transport. Road driving simulators are experimental facilities using VR technology that allow simulation of various traffic environments, such as traffic accidents, which are difficult to implement on real roads.

Moreover, reflecting the motion control technology, the vehicle behavior, such as sudden lane changes and rapid turn, centrifugal acceleration, is reproduced by over 90% to realize the driving situation virtually from the driver’s perspective. This allows verification of driver driving behavior according to road conditions through virtual reality rather than actual roads, helping to solve daily problems of life and death at a safer and more reasonable cost.

INNOSIMULATION, which has received level 3 certification of CMMI, has entered Malaysia as a key technology, motion control system. In response, INNOSIMULATION official said, "We entered Malaysia as the only company certified by level 3 in the field of VR simulation system research and development, and we feel responsible for the VR industry in Malaysia."

Detailed information on INNOSIMULATION can be found in the links below.