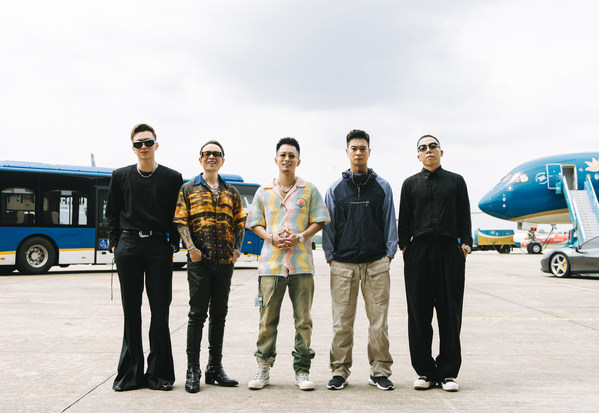 Watch the MV "Hurry up!" on YouTube at the link here: https://www.youtube.com/watch?v=uQHHzgROvjw

Vietnam Airlines and SpaceSpeakers Group created an unprecedented event in the Vietnamese music market when announcing the MV launch right on the flight between Ho Chi Minh City – Hanoi, which took off on the morning of July 11, with more than 300 passengers. Six special passengers, who are famous artists from SpaceSpeakers, including Touliver, SOOBIN, Binz, Rhymastic, SlimV and Kien Ung, suddenly appeared on the flight.

Rhymastic said this is a special event, possibly only once in his lifetime and the same for all members of SpaceSpeakers. With the song "Hurry up!", the music of SpaceSpeakers will spread from the ground to the sky. SpaceSpeakers Group has also never released an in-flight music product before. Therefore, the images and moments of this "special flight" will be repeated for many more years.

The melody of the song "Hurry up!" will broadcast on more than 400 flights of Vietnam Airlines every day at the time of landing, reaching more than 100,000 customers/day. MV "Hurry up!" also officially launched on online music platforms from the evening of July 11th.

The trio of SOOBIN, Binz and Rhymastic featured in the song "Hurry up!" Touliver and SlimV are in charge of mixing and producing music. The music color in "Hurry up!" is a huge difference from what the audience used to know about SpaceSpeakers, when it was no longer the usual Rap/Hip Hop, but 5 artists created a joyful, inspirational pop song in the right spirit when combined with Vietnam Airlines.

Through the MV "Hurry up!", SpaceSpeakers Group wants to create more than a theme song for Vietnam Airlines, thereby spreading the message, inspiring travel, discovering experiences after 2 years of the COVID-19 pandemic as soon as possible because maybe the beautiful scenery will be lost or time will not stand there waiting for us.

In the MV "Hurry up!", artists Touliver, SOOBIN, Binz, Rhymastic and SlimV are in different scenes. The MV opens with a scene of immense mountains and forests in Ha Giang. There, SlimV appeared, enjoyed the scenery on a bicycle, and then met the highlanders. Rhymastic is traveling on a bus, surrounded by people of different professions, but sharing a common positive energy. Binz appeared and sang in a fancy restaurant. SOOBIN stepped out of a museum. And Touliver stepped out of the aircraft cabin extremely classy and powerful.

Five artists, each moving in different ways, but with the same destination. Touliver, SOOBIN, Binz, Rhymastic and SlimV gathered to dedicate a "music party" to those around them. From pilots, flight attendants, technicians, to passengers, workers or children, all enjoy the wonderful atmosphere that SpaceSpeakers artists bring.

MV "Hurry up!" is the latest category between Vietnam Airlines and SpaceSpeakers Group cooperation agreement. Previously, in November 2021, the two organizations signed a cooperation agreement "The Karman Line". For the first time, a press conference was held in the aircraft cabin. Vietnam Airlines and SpaceSpeakers Group will jointly perform 8 categories, in which producing the theme song "Hurry up!" is a special milestone.

This product also shows the transformation of Vietnam Airlines in the goal of brand rejuvenation, reaching more customer segments, while preserving traditional cultural values. Meanwhile, the handshake with Vietnam Airlines is a step forward for SpaceSpeakers Group in affirming its position as the leading music organization in Vietnam.

For more photos of the news, please kindly check the link here.