HONG KONG, May 11, 2022 /PRNewswire/ — Unihertz has just launched the company’s third and latest smartphone of its QWERTY series, Titan Slim, a sleek and neat physical keyboard smartphone which has already raised over $400,000. The campaign is currently in full swing on Kickstarter: https://www.kickstarter.com/projects/jellyphone/titan-slim-the-new-sleek-and-slim-qwerty-android-smartphone?ref=3wehrr 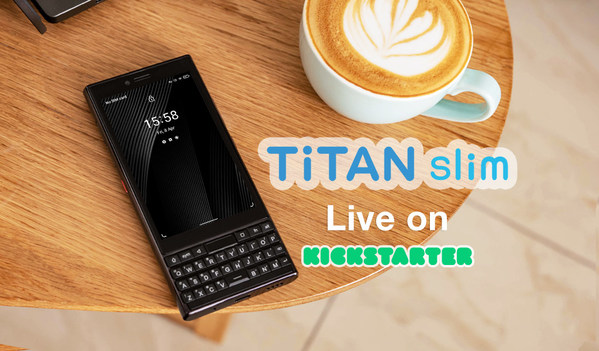 After Onward Mobility confirmed the death of its QWERTY project, Unihertz probably has become the only choice for people who are still seeking keyboard smartphones, which is absolutely admirable and commendable. Unihertz’s Titan series may not be ideal for everyone, it’s good to see that someone is still working on it. We can expect that by supporting Unihertz’s current offering, we have done our parts to increase the chance of more advanced physical keyboard phones being created in the future, and we would like the company to make more of these!

From what we observed in the past two years, the widespread popularity of Titan and Titan Pocket seems to have enabled the brand to dig deeper into the value its QWERTY products can provide. Hence the creation of Titan Slim. "Being the third Titan phone in line, Titan Slim adopts a brand-new form which doesn’t mean to replace its predecessors, but to offer an alternative for PKB fans who prefer sleekness over ruggedness and rectangular screen over the square ones," says Stephen Xu, the founder and CEO of Unihertz. For some, the rectangular screen is indeed more user-friendly and more compatible with modern Apps.

As always, Unihertz makes smartphones that meet its users’ daily needs, without unnecessarily exaggerated features, and that serve as good conversation starters wherever one goes. "The core value of this company is not to follow the mainstream, but to develop products that offer our customers more choices," says Mr. Xu. In fact, Unihertz has proven its capability to bring to the world smartphones that satisfy niche demands several times. The first Jelly phone swept the industry with its mini size and received popularity among pragmatic minimalists. Later, the company brought back small rugged smartphones and revived QWERTY keyboard phones that were equipped with the latest Android technology, all with great triumphs.

This year marks the company’s fifth-year anniversary on Kickstarter, and it proudly presents its latest project, Titan Slim. The QWERTY phone is now available for early adopters and returning fans. To learn more about it, visit: https://www.kickstarter.com/projects/jellyphone/titan-slim-the-new-sleek-and-slim-qwerty-android-smartphone?ref=3wehrr

Interested in other QWERTY smartphones Unihertz made? Visit: www.unihertz.com