TOKYO, March 18, 2022 /PRNewswire/ — Toshiba Corporation (TOKYO: 6502) has revealed major advances in shrinking the laser projector unit of its LiDAR to one quarter the size of the previous version released in June 2021. Using two of the new projector units, the new LiDAR is just 206cm3 in volume that can fit comfortably into the palm of the hand. Its range has been pushed out to 300m, the world’s longest* with an industry-leading image resolution of 1200×84 pixels. It can be configured with flexible combinations of projector units to handle a variety of long-range and wide-angle detection applications.

The new LiDAR will advance progress in Toshiba’s focus application areas, autonomous driving and infrastructure monitoring, and also opens the way to exploring partnerships in other areas, including robotics, drones and small security devices. Toshiba initiated LiDAR research to advance autonomous driving and infrastructure resiliency. In addition to extending the range, with a wider viewing angle and better resolution, it had to make the LiDAR even smaller. However, there has long been a trade-off in LiDAR range and size against the requirement of an eye-safe laser. Akihide Sai, the Senior Research Scientist at Toshiba’s Corporate Research & Development Center behind the new LiDAR, explains the challenge: "To extend the range of a laser emitted by a single projector, you have to increase its intensity. If you do that, you also have to increase its emission width, to avoid a beam that focuses on a small spot and is strong enough to impair eyesight. The problem is, a wider emission requires a larger projector."

Toshiba’s solution is a LiDAR that can use multiple small projector units, the laser beam source. They all emit an eye-safe beam in the same direction, which increases the effective range. This approach also keeps down the LiDAR’s overall size.

The advances that realized the new LiDAR started with shrinking the volume of the projector unit to 71cm3. This was achieved with an innovative circuit design that reduced the motor control board by 60% against the size of the previous prototype, and using know-how in 3D component mounting to reposition components and lenses.

Figure 2: Overview of Toshiba’s solution to overcome the trade-off in LiDAR size and range against the requirement of an eye-safe laser. 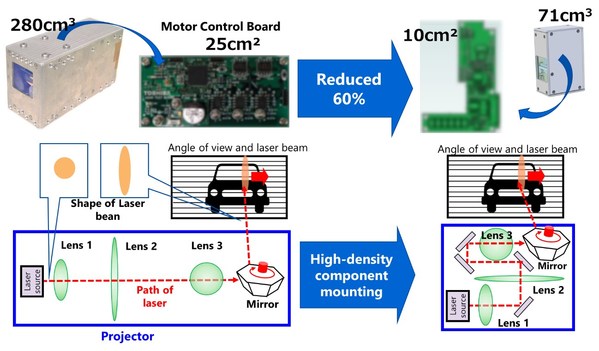 Figure 3: Shrinking projector size with a smaller motor control board, and by using 3D mounting technology to position components and lenses.

The development team also drew on Toshiba’s proprietary motor control technology to come up with a triple control loop for the rotation speed, rotation angle and current of the polygonal mirrors in multiple projectors. This secures high accuracy synchronization, and the deviation angle of the mirrors is only 0.02 degrees or less.

In field tests, Toshiba confirmed that a LiDAR with two of the new projectors has a range of 300m, 1.5 times further than its previous prototype with a single projector. In very bright sunlight conditions, 100,000 lux, the two-projector LiDAR also showed much more detail in the scanned image than its predecessor. Figure 4: A LiDAR with two of the new projectors has reached a range of 300m.

The flexibility gained by combining multiple projectors, and fine-tuning control of the emitted laser, opens the way to customizing the LiDAR for long-range and wide-angle scanning. This will extend use to areas such as automatic guided vehicles, which must combine wide-angle views with long-range route monitoring.

Figure 6: LiDAR of various performances can be realized by combining the developed projectors.

Sai and his colleagues are building on current achievements for future advances: "We are continuing research work that will advance our LiDAR technology, including solid-state LiDAR, toward boosting range and resolution, and making the LiDAR even smaller. We aim to commercialize LiDAR for autonomous driving and infrastructure monitoring in fiscal year 2023, and look forward to exploring new applications in robots, drones, and security devices."

Toshiba Corporation leads a global group of companies that combines knowledge and capabilities from over 140 years of experience in a wide range of businesses—from energy and social infrastructure to electronic devices—with world-class capabilities in information processing, digital and AI technologies. These distinctive strengths support Toshiba’s continued evolution toward becoming an Infrastructure Services Company that promotes data utilization and digitization, and one of the world’s leading cyber-physical-systems technology companies. Guided by the Basic Commitment of the Toshiba Group, "Committed to People, Committed to the Future," Toshiba contributes to society’s positive development with services and solutions that lead to a better world. The Group and its 120,000 employees worldwide secured annual sales surpassing 3.1 trillion yen (US$27.5 billion) in fiscal year 2020.

Find out more about Toshiba at https://www.global.toshiba/ww/outline/corporate.html