TOKYO, June 11, 2021 /PRNewswire/ — Toshiba Corporation (TOKYO: 6502) today announced an updated solid-state LiDAR that achieves the world’s smallest volume, robust vibration and wind resistance while maintaining a maximum detection range of 200m, plus the highest resolution of any sensor of similar size*. The upgraded performance of the new LiDAR will advance progress to autonomous driving, and also expand its application into monitoring transportation infrastructure, in such areas as early detection of road subsidence or landslides, snow cover, or falls of objects onto roads.

Current monitoring of transportation infrastructure relies on cameras, but their performance is degraded by low light and bad weather. Toshiba’s upgraded solid-state LiDAR is an excellent alternative, as it realizes clear, long-distance, robust 3D scanning and object detection in a wide variety of lighting and weather conditions. It is also extremely compact, with an overall volume of 350cc. It is only one-third the size of an earlier prototype announced in July 2020, and the industry’s smallest on record*.

"We look forward to deploying our technologies in roadside LiDAR," said Akihide Sai, Senior Research Scientist at Toshiba’s Corporate Research & Development Center. "We have secured technologies essential for a compact, high-resolution, long-range solid-state LiDAR that is robust and simple to install. We anticipate demand for such a versatile technology in both the autonomous driving and transportation infrastructure monitoring markets."

These innovations have reduced the size of the SiPM by 75% while enhancing its light sensitivity by 50% against the July 2020 predecessor. More SiPM can now be arrayed in the same package, boosting resolution to 1,200 x 80 pixels, a 4-times improvement. 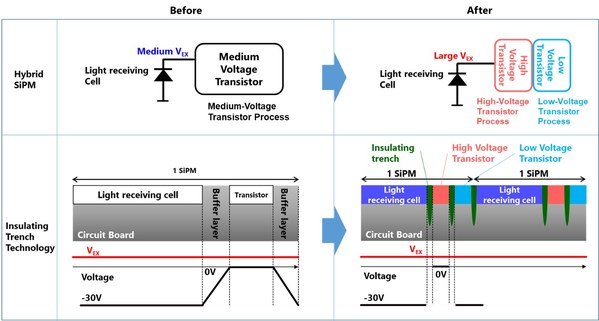 Toshiba has also ensured that the new LiDAR unit has the durability essential for outdoor use in all weather conditions. Temperature compensation technology that automatically adjusts voltage input to the light-receiving cells reduces impacts from external temperature changes and maintains high level SiPM performance. In addition, by utilizing its know-how in high-density component mounting, Toshiba has reduced the overall size of the LiDAR projector and receiver to 350cc (Figure 2), and secured robust vibration and wind resistance. These advantages, plus world-beating high resolution, are expected to win wider application of the system. 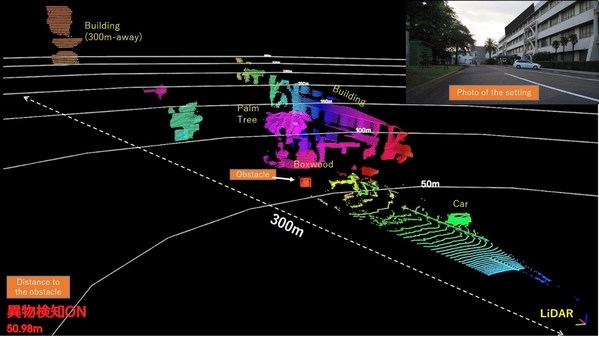 Toshiba Corporation leads a global group of companies that combines knowledge and capabilities from over 140 years of experience in a wide range of businesses—from energy and social infrastructure to electronic devices—with world-class capabilities in information processing, digital and AI technologies. These distinctive strengths support Toshiba’s continued evolution toward becoming an Infrastructure Services Company that promotes data utilization and digitization, and one of the world’s leading cyber-physical-systems technology companies. Guided by the Basic Commitment of the Toshiba Group, "Committed to People, Committed to the Future," Toshiba contributes to society’s positive development with services and solutions that lead to a better world. The Group and its 120,000 employees worldwide secured annual sales surpassing 3.1 trillion yen (US$27.5 billion) in fiscal year 2020.

Find out more about Toshiba at https://www.global.toshiba/ww/outline/corporate.html