BEIJING, Aug. 24, 2020 /PRNewswire/ — On August 24th, TOJOY is hosting the “2020 China Unicorn Carnival”, where promising companies can access capital, resources, and partnerships needed for growth across China via one of the world’s largest business acceleration platforms. In just its first day of events, 34 projects accelerated on the TOJOY platform announced their intention to list publicly with TOJOY’s listing program assistance. 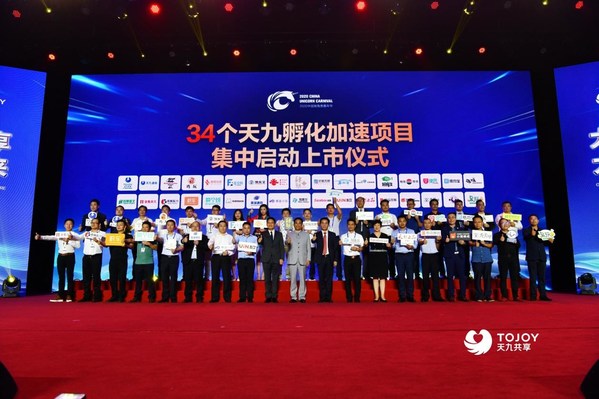 At the company’s 29th Anniversary event on August 18th, TOJOY leadership spoke on the previous successes that had laid the ground for the announcement by the 34 semi-unicorn projects. All 34 have grown with TOJOY by using the platform to access capital, partners, and entrepreneurial resources at unprecedented speed.

In April 2020, at a critical juncture of China’s economic recovery, TOJOY and the China Investment Association High-tech Investment Professional Committee held the Second Global Unicorn Fair through TOJOY’s online platform, the TOJOY Entrepreneur Cloud app. Ten companies took advantage of the event to access capital, resources, and partnerships offered via the platform from hundreds of thousands in attendance worldwide.

By consistently building, improving, and deploying its sharing platform on a global scale, TOJOY has brought together powerful commercial resources around the world to inject a steady stream of growth into accelerating companies.

At the TOJOY 29th anniversary celebration, Chairman of the TOJOY Board of Directors, Lu Junqing, credited four major achievements throughout the company’s first three decades that he believes have led to its current success. Those are the creation of the company’s uniquely integrated universal business model, the debut of its global O2O super business platform, the development of a self-governing management system that incentivizes hard work and merit, and the accumulation of a high-quality global entrepreneurial team.

Chairman Lu also credited platform-wide adherence to a code of “innovation, unity, and integrity” as keys to TOJOY’s continued success.

Today, TOJOY is accelerating more than 300 companies across a wide range of industries, with special focus on innovative sectors such as e-commerce, internet of things, and big data-focused companies.

TOJOY Global CEO Ge Jun Speaks on Looking to the Future,Ge expects that TOJOY will continue to strengthen its incubation abilities and expand its platform to realize profits by 2021, then in 2022-2023, to fully deploy its global unicorn accelerator to empower enterprises worldwide.