A contest on the theme of the Belt and Road Initiative (BRI) of the "Tell China’s Stories" Contest 2020 and a seminar on Qingdao building a new platform for international cooperation under the BRI framework were launched in Jiaozhou of Qingdao, East China’s Shandong Province, on August 21, 2020. 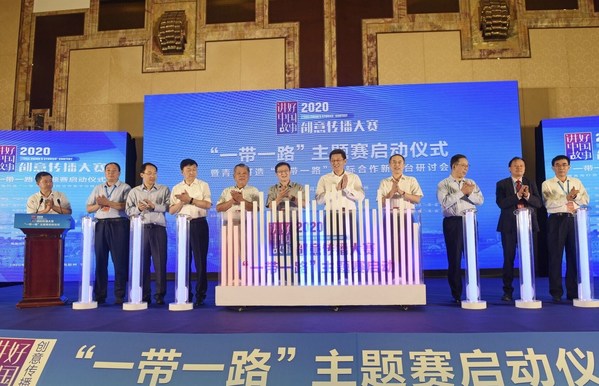 The contest is steered by the State Council Information Office and sponsored by China International Publishing Group. Open to all the BRI countries and regions, domestic and foreign enterprises, institutions and individuals, the contest looks for good stories about the BRI on economic integration, cultural inclusiveness and people-to-people exchanges and about the global community of shared future. During the seminar, attendees discussed Qingdao’s initiative of building a new BRI cooperation platform.

Liu Jianjun, member of the Standing Committee of the Qingdao Municipal Party Committee, secretary of the Jiaozhou Municipal Party Committee, and secretary of the Party Working Committee and director of the Management Committee of the the China-Shanghai Cooperation Organization (SCO) Demonstration Zone for Local Economic and Trade Cooperation [of Qingdao], said that the core area of the demonstration zone is located in Jiaozhou, Qingdao. One of its important tasks is to strengthen people-to-people connections and cultural exchanges by building a business and tourism development center and establishing an exchange platform for BRI countries and regions, especially SCO members. More and more SCO-related projects will be launched and carried out in the demonstration zone. Youth, experts and academics from SCO member countries say that they will meet here, establish friendships, and talk about the future.

Xiang Zhiqiang, deputy director of the Management Committee of the China-SCO Demonstration Zone for Local Economic and Trade Cooperation [of Qingdao], explained that the zone will be a new platform for BRI-based international cooperation. To this end, five centers will be founded at the zone to expand cooperation in international logistics, modern trade, two-way investment, business and cultural exchanges, and maritime affairs. Therefore, Qingdao will play a greater role in the BRI New Eurasian Land Bridge economic corridor and maritime cooperation, and China will strengthen its links with SCO countries and promote bilateral economic cooperation and land-sea linkage.

At the demonstration zone, we respect cultural traditions of BRI countries and regions and will make full use of internet ideas and new technology to promote deeper integration of BRI countries’ culture under the guiding principle of seeking mutual benefit and harmony but not uniformity, with a more open and inclusive mindset. The goal is to make the BRI a road of civilization, communication and cooperation.

Fan Hengshan, an eminent economist and former deputy secretary general of the National Development and Reform Commission, said that the demonstration zone must start well and pursue high-quality development. Efforts are to be made in laying three solid foundations and have the zone play a demonstration role in four aspects. The three foundations are an international and open environment as a good institutional foundation for both the international and domestic markets, intelligent operation facilities as a good hardware foundation, and an inclusive cooperation platform as a supporting foundation. The four aspects of its demonstration role are an open and connected innovation system, an upgraded industrial base and modernized industrial chain, diversified cooperation and exchange, especially economic and cultural exchanges, and a globalized and multilateral trade system.

Hu Biliang, executive dean of the Belt and Road School and dean of Emerging Markets Institute of Beijing Normal University, emphasized three areas of BRI cooperation — ASEAN, the European Union and the SCO. According to Hu, ASEAN has become China’s largest trade partner; cooperation between China and the EU in the field of high-tech is very important; and China and SCO member countries can strengthen cooperation in resource development, manufacturing integration and high-tech. In today’s international situation, new ways of cooperation and the China-SCO Demonstration Zone will offer high hopes to high-quality BRI development. SCO member states are key among BRI counties and regions; of the six economic corridors under construction, five are in SCO member states. Thus the demonstration zone is not only valuable for China but for all the BRI and SCO countries. It will be invaluable for promoting the BRI.

Yu Yunquan, director of the Academy of Contemporary China and World Studies said that steered by the SCO Qingdao Summit and the demonstration zone, Qingdao has seen its image as an international city becoming more distinct. He suggested that in order for the high-end exchange platform to succeed, it must be a platform for professional in-depth dialogue, for interdisciplinary exchange and mutual learning, and for offline face-to-face and efficient online communication. More attention should be paid to the role of intelligence in urban development; by this, Qingdao should establish a high-end think tank cultivation base as opportunities arise, attract more intellectual resources to settle there, and continue to expand its circle of friends. Qingdao should stand at the forefront of China’s opening up and tell its stories in the new era.

Shen Zhengping, executive dean of the Belt and Road Institute of Jiangsu Normal University, pointed out that Jiaozhou is a well-developed city with a long history and broad future prospects. Building the China-SCO Demonstration Zone in Jiaozhou will raise Qingdao’s role in the BRI. Three key expressions define the demonstration zone: high-level, open and modern. Being high-level requires high-standard and high-level planning; being open needs a broader international vision; and being modern demands higher positioning. He suggested that we should integrate all kinds of development platforms at all levels in Qingdao to support the construction of the demonstration zone. Moreover, we should coordinate all parts of the Jinan economic circle, and ensure interactive development of Jinan and Qingdao with resources from all over the province of Shandong. We should consider the demonstration zone in the Yellow River basin, and at the same time, make overall plans in consideration of both domestic and international conditions, so as to build a high-quality zone for economic and trade cooperation oriented towards both the international and domestic markets.

Zhu Hongren, executive vice chairman and director general of China Enterprise Confederation/China Enterprise Directors Association, said that the BRI is a public product China is providing to the international community and it reflects the common values of humanity and the reality of contemporary international relations. The China-SCO Demonstration Zone will become a new BRI highlight, and a source of information for telling China’s stories. It is a platform for open, interactive East-West and land-sea interaction. It is expected to achieve fruitful results in expanding cooperation international logistics, modern trade, two-way investment, business and cultural exchanges and other fields. We should make better use of Qingdao’s role in the BRI New Eurasian Land Bridge economic corridor and maritime cooperation, and strengthen mutual connections with SCO member countries.

Zhou Xisheng, former vice president of Xinhua News Agency and member of the experts committee of Project of Research and Development International, pointed out that Qingdao has advantages in geographical location and eco-environment. It integrates tradition and modernity, economy and trade, advanced science and technology and high-end talent, advanced industries and product markets, social sciences and humanities, life and fashion, health and food, culture and art, tourism and sports. These are the primary international concerns about China and Qingdao at present and in the future, and are also areas worth being recommended to the international community. There are four key words to tell good stories of Qingdao: story, platform/medium and audience. At the same time, three key groups should be targeted: international businesspeople, international tourists and international media. The highlight of Qingdao stories should be rule-observing, honesty and the sense of responsibility.

CIIC Deputy Editor-in-Chief Xue Lisheng believed that Qingdao was the starting point and an important hub of the northern route of the maritime Silk Road in ancient times. As an important port city, it is an important part of BRI transnational cooperation. When telling BRI stories, adding Qingdao or Jiaozhou features will help present a full picture of the BRI and Qingdao.

The contest is sponsored by China International Publishing Group, co-hosted by the Academy of Contemporary China and World Studies, China Internet Information Center, the Communication Department in Qingdao, and the Belt and Road Initiative Think Tank of the Chinese Academy of Social Studies. It is run by belt.china.org.cn of China.org.cn, China Development Gateway, the Communication Department of Jiaozhou, and Project of Research and Development International. And it is supported by China Enterprise Confederation/China Enterprise Directors Association, the Belt and Road School of Beijing Normal University, and B&R Institute of Jiangsu Normal University.