This sales record during the Fan Festival 2021 came on the back of another milestone, as realme celebrates 100 million smartphones sold. realme was also the fastest major smartphone company to cross this milestone, achieving it just three years since its establishment. To thank the fans and its supporters, realme held its Fan Festival virtually, dedicated to the many passionate fans who are passionate about the brand and its products.

realme has shown that the power of youth and the focus on young audiences worldwide is a sustainable and correct strategy. In addition to being the fastest major smartphone company to cross 100 million units sold, realme is also the fastest-growing major smartphone brand globally in Q2 2021 with a year-over-year growth rate of 149%, as data from research firm International Data Corporation (IDC) showed. Currently, realme ranks in the Top 5 smartphone makers in 18 markets, claiming first place in the Philippines and Bangladesh, fourth in India and Russia and fifth in the Europe region in Q2 2021. 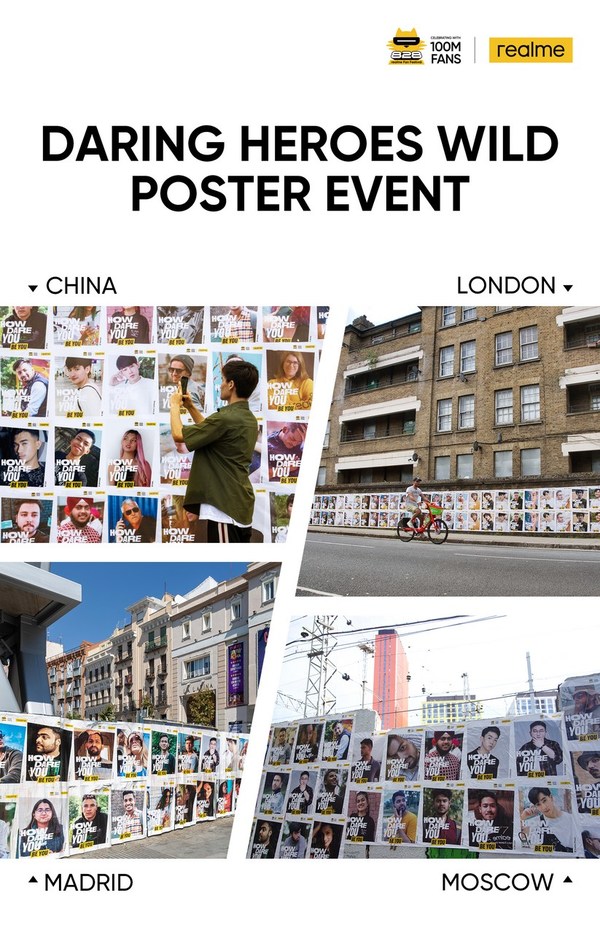 In conjunction with the Fan Festival, realme organized a campaign called the ‘Daring Heroes Wild Poster Event’ where realme received photo submissions from fans and showcased them in key urban centres of London, Moscow, Madrid and Shenzhen, to showcase the realme spirit, aptly titled: ‘How Dare You Be You’. The campaign is a celebration of the restless spirit of those who dare to live their own truths despite the judgements and obstacles they may face. With this powerful statement, realme aims to empower fans to turn negative external noise into positive empowerment.

As pioneers and true believers of this spirit, realme has forged ahead where many others have seen only danger. Sky Li, Founder and CEO of realme, said at the festival: "Young people, both our consumers and our staff, have taught us to dare to leap into the future and be trendsetters, giving us the courage to disrupt a well-entrenched industry."

realme’s success has shown that even in a highly competitive environment, with the right team and the right heart, it is possible to dare to leap and conquer both fears and dreams. Nothing is impossible with the power of youth, as seen by the stellar sustained sales performances over the past three years.

About realme:
realme is a global emerging consumer technology company disrupting the smartphone and AIoT market by making cutting-edge technologies more accessible. It provides a range of smartphones and lifestyle technology devices with premium specs, quality, and trend-setting designs to young consumers at affordable prices.

Established by Sky Li in 2018 and driven by its "Dare to Leap" spirit, realme is the world’s 7th largest smartphone company. As of Q2 2021, realme has entered 61 markets worldwide, including China, Southeast Asia, South Asia, Europe, Russia, Australia, the Middle East, Africa and Latin America, with a global user base of over 100 million. For more information, please visit www.realme.com.