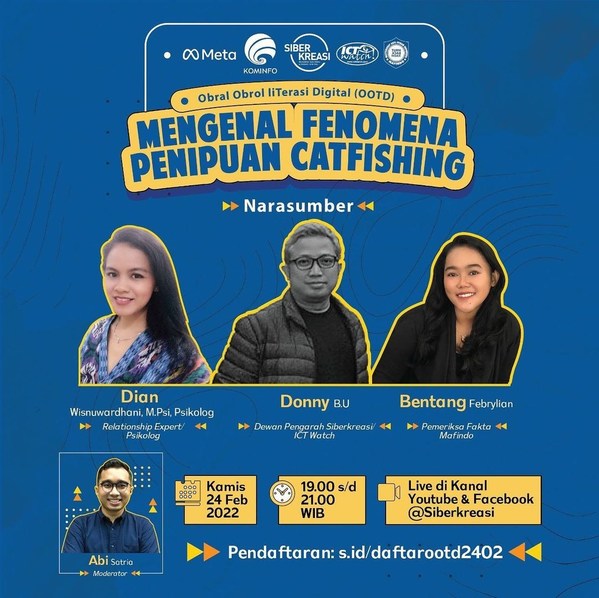 Catfishing is a term that is used to describe a scam which uses false online identity to deceive the victim. The fraudster usually uses unsolicited photographs and information of another person to create a believable online persona that might romantically charm the victims, only to eventually extorting them and leading the victim to suicide in extreme cases.

This catfishing phenomenon turns out to be a major discouraging factor when using dating apps. A study stated, 65% of a total 18,000 respondents in 27 countries (including Indonesia) were afraid being scammed on dating apps, and upsettingly, 15% of total respondents reported that they have already been scammed. Among the scammed, catfishing is the number one modus operandi with 51% of those who were targeted fell for it.

Internet makes it possible for anyone to create its own identity, so anyone can be any character that they want to be online. "Identity play becomes a form of satisfaction when perpetrators are being perceived as another person in people’s eyes. Unfortunately, this technology is also used to commit frauds," said Donny.

There are key characteristics that may be referred to identify an online catfish, namely: refusing to make video call, avoiding face-to-face meeting, and restricting communication only via chat and voice call. "Most likely, catfish perpetrators behave like that to protect their identities from being exposed. So, the victim will not have any clue on the actual face of the catfish perpetrators," said Bentang.

Furthermore, Dian views that catfishing phenomenon occurs when people are not comfortable for being themselves, thus the perpetrator cannot show their natural selves without any disguise. "From psychology standpoint, this is called identity confusion, so they are confused with themselves. If we use Facebook or Instagram, when we frequently took pictures by using filters rather than being natural, this shows that something is going on with the personality of such person," said Dian.

About The Ministry of Communication and Informatics of Indonesia

The Ministry of Communication and Informatics of Indonesia through Ditjen Aptika has the primary function of spreading and developing the national digital infrastructure to accelerate Indonesia’s digital transformation.

The Ministry is working with National Digital Literacy Movement Siberkreasi as its partner to provide education on digital literacy to the broader public through various forms of media. This movement is focused on using digital literacy as a way to elevate the national capability and to further the Indonesian people.