MANILA, Philippines, Oct. 12, 2022 /PRNewswire/ – Globe Gamer Grounds, an all-in-one gaming platfrom by Globe Telecom and Swarmio Media connecting Filipinos gamers regardless of the platform they game on, is proud to announce the very first community tournament, The Gamer Grounds Championship with a total prize pool of PHP 1.5 million. 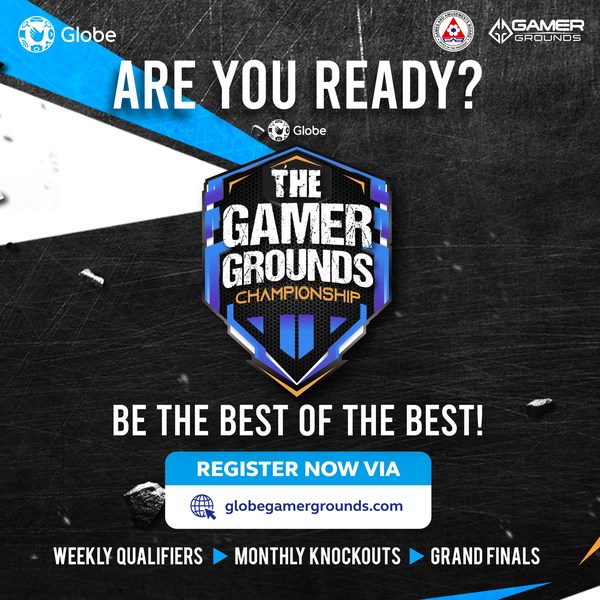 THE GAMER GROUNDS CHAMPIONSHIP KICKS OFF WITH 1,500,000 PHP PRIZE POOL

Seeking to further reward gamers while playing their favorite games, Globe Gamer Grounds is organising the championship across three sought after game titles, including PUBG Mobile, open to all non-professional gamers residing in the Philippines. The PUBG Mobile inclusion in the tournament comes after Globe Gamer Grounds’ successful previous working relationship with the technology and entertainment giant Tencent with other publisher collaborations still in the works.

With the support from Gaming and Amusement Board (GAB), Philippine Esports Organization (PeSO) and Tencent, The Gamer Grounds Championship will be kick starting with PUBG Mobile and will be awarding outstanding gamers with various prizes throughout the stages:

To qualify for the Grand Finals of the championship and a shot at the main prize, teams are required to successfully brave four weekly qualifiers, and proceed to battle it out over three knockout stages. Moving forward, the top four teams from each knockout stage will proceed to the grand finals.

This championships is one of Globe Gamer Grounds many efforts to fuel the passion for gaming among the local gaming community, in line with their mission to be the platform of choice that connects and rewards the gaming community in the Philippines.

Benj Dalmacio, Senior Business Development Manager for Level Infinite / PUBG MOBILE PH says, "In line with our shared commitment to growing the gaming and esports industry in the Philippines, we are glad to support the Gamer Grounds Championship and its objectives of uplifting the Filipino gamers’ experience and growing the community."

Launched in April this year, the all-in-one gaming platform was developed through a strategic partnership between Globe Telecom, the Philippines’ largest mobile network operator, and Swarmio Media, a gaming ecosystem developer. By combining various well-known e-sports in a tournament format, Globe Gamer Grounds aims to cultivate the growing gaming community and provide a supportive ecosystem for these talents to flourish.

Registrations are now open for the PUBG Mobile community for the on globegamergrounds.com with the registrations for the other two titles opening on November 10 until the start of each week’s qualifier rounds.

Globe Gamer Grounds is a platform to unite Filipino Gamers regardless of the games or devices they play. Registered users will be able to participate in daily tournaments, influencer challenges among others and be rewarded with Ember Points which can be redeemed into in-game currency, gift vouchers and many more.

Globe is a leading full-service telecommunications company in the Philippines and publicly listed in the PSE with the stock symbol GLO. The company serves the telecommunications and technology needs of consumers and businesses across an entire suite of products and services including mobile, fixed, broadband, data connectivity, internet and managed services. It has major interests in financial technology, digital marketing solutions, venture capital funding for startups, and virtual healthcare. In 2019, Globe became a signatory to the United Nations Global Compact, committing to implement universal sustainability principles. Its principals are Ayala Corporation and Singtel, acknowledged industry leaders in the country and in the region. For more information, visit www.globe.com.ph. Follow @enjoyglobe on Facebook, Twitter, Instagram and YouTube.

Swarmio Media (CSE: SWRM; OTC: SWMIF) is a technology company focused on deploying its proprietary end-to-end gaming and esports platform, Ember, which enables telcos to monetize their gaming customers. Swarmio has engaged with several telcos that have launched Ember as an add-on service, allowing subscribers to access tournaments, engage in a localized gaming community, challenge friends and influencers, and earn points that can be used to purchase gaming content. Ember is powered by Swarmio’s patented Latency-Optimized Edge Cloud (‘LEC’) technology, which reduces lag and allows gamers to enjoy an optimized gaming experience.