NANJING, China, Sept. 19, 2022 /PRNewswire/ — On September 15, the digital cloud platform of the Grand Canal National Cultural Park was unveiled at the 3rd China International Cultural Tourism Fair and the 1st Traditional Chinese Crafts Fair held in Jinan, Shandong Province. It was the first time that the platform had appeared at an international exhibition after its debut at the 2022 World Canal Cities Forum (WCCF) in Jiangsu Province. 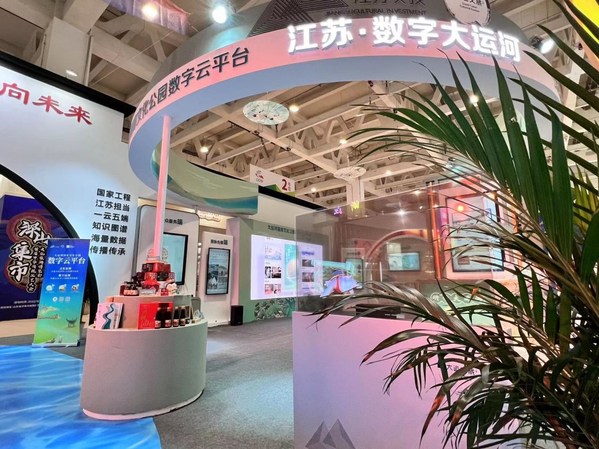 The focus was on displaying how Jiangsu Province had used digital technologies to tell the story of the canal and brought canal culture to life. Moreover, the innovative achievements of Jiangsu were highlighted such as content aggregation, digital governance, supply and demand matching and industry promotion.

The digital cloud platform is one of the two major projects assigned to Jiangsu by the construction of the Grand Canal National Cultural Park. The National Development and Reform Commission has proposed in documents that it is imperative to give full play to the exemplary and leading role of the cloud platform in constructing digital platforms.

Under the guidance of the Publicity Department of CPC Jiangsu Provincial Committee (Provincial Grand Canal Office), Jiangsu Cultural Investment Group Co., Ltd. took the initiative and made active efforts to promote construction of the project with high standard, quality and grade. It was completed on schedule at the end of 2021 and started trial operation.

On June 27 this year, the cloud platform was released at the opening ceremony of the World Canal Cities Forum and received full recognition for its achievements. At this exhibition, the cloud platform with the theme of Digital Grand Canal showed the details from the perspectives of government affair service, public service, enterprise service, international communication and offline display.

Among them, the public service makes full use of the advantages of cyberspace and consists of three sections, namely knowing the canal, exploring the canal, and touring the canal. They innovatively disseminate canal culture in different ways, such as knowledge popularization, fun interaction and intelligent cultural tourism. When it comes to international communication, "The Golden Canal" accounts have been established on multiple mainstream media platforms to build an international communication network, thus linking China and overseas.

On the site, the cloud platform developed and launched the digital pet, Baxia, which physically interacts with the audience and attracts wide attention. In the exhibition area, there is also an online route for search and study on the canal study platform. Through the courses and innovative practical classes, visitors can experience the Chinese stories and Chinese wisdom in the Grand Canal in a one-stop manner.