NEW YORK, Oct. 18, 2022 /PRNewswire/ — TurtleMe, the creator of the #1 hit web novel and webcomic series ‘The Beginning After The End (also known as TBATE)’ on Tapas, will debut his face for the first time to fans and press at the Tapas panel The Beginning After the End (Tapas): Creator TurtleMe Reveal! at Anime NYC Friday, November 18th at 2PM ET. 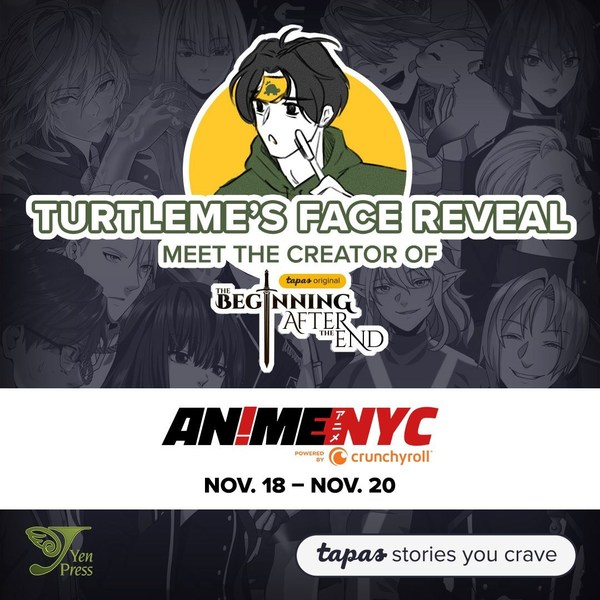 TurtleMe is an official guest of Anime NYC and will participate in several events throughout the weekend including a Q&A at the Yen Press Industry Panel on November 19th at 12PM ET, and several signing sessions.

He shared, "I am honestly so excited to meet my fans face to face for the first time. I started publishing The Beginning After The End on Tapas in 2016 and the constant fan support around it is the reason why today it has been made into both a webcomic and a printed graphic novel, I owe it all to them. I’m in awe, these fans inspire me every day to become a better storyteller, and to be an official guest of the con feels like a big step for me as a creator."

The Beginning After the End publishing partners Tapas (webcomic and web novel) and Yen Press (graphic novel) will collaborate at Anime NYC to connect this beloved creator and story with fans around the world traveling to the convention. Both publishing partners will have a booth on the convention floor – Tapas (booth #554) featuring free TBATE poster giveaways and Yen Press (booth #1516) selling the TBATE graphic novel along with other fun giveaways. Tapas is also hosting a sweepstakes in partnership with Anime NYC on social media, giving away Anime NYC weekend passes to one lucky fan! For more details, please follow @Tbateofficial on Instagram and Twitter.

Tapas CEO, Chang Kim: "Tapas in its DNA is a creator-first platform and TurtleMe is one of our original creators; we have really grown together. To be able to support him at Anime NYC and connect TurtleMe to fans that have supported The Beginning After The End and our platform for years in a big way is really exciting and incredibly rewarding."

"We are elated that TurtleMe will reveal his face for the first time at Anime NYC," said Anime NYC show director Peter Tatara. "TurtleMe pushes boundaries, and as a story that’s inspired by both western and eastern fantasies, The Beginning After the End has really captured reader’s imaginations. Those who will attend the TurtleMe Tapas panel are in for a treat."

Tapas Media, Yen Press, and Anime NYC will be releasing a full-access media kit following Anime NYC on Sunday November, 20th. Branded assets, images, panel footage and video from the convention floor amongst other downloadable materials will be made available to interested members of the press.

Formed in 2012, Tapas Media is a leading global digital publishing platform for webcomics and web novels, distributing over 1.6M episodes in almost 100K series from both independent content creators and established storytellers to the 10M-strong community, resulting in over 8B views.

With global offices in Los Angeles, Seoul, and Beijing, and a wide range of publishing partnerships including Scholastic, Yen Press, Podium, and Andrews McMeel Publishing. Tapas is the 2020 Ringo Award winner for Favorite Publisher and received their first Eisner nominations in 2021. Most recently Tapas made a name for itself in its $500M acquisition by entertainment giant, Kakao Entertainment. Tapas Media is the premiere digital destination to create and consume the stories you crave.

Yen Press, LLC is a joint venture between Kadokawa Corporation and Hachette Book Group. Founded in 2006, Yen Press has quickly risen to become one of the largest and most prolific publishers of manga and original graphic novels in the North American marketplace and a driving force in the introduction of light novels and Japanese literature to new readers through its Yen On and Yen Audio imprints. For more information, visit www.yenpress.com.

Anime NYC was founded in 2017 and has quickly become the fastest growing anime convention in the US, second only to Anime Expo which welcomes 100,000+ attendees in Los Angeles. Anime NYC has presented the largest Japanese concerts in NYC history and global premieres, before even Tokyo. The convention works with major companies in the Japanese entertainment world including Aniplex, Bandai Namco, Crunchyroll, GKIDS, HIDIVE, Kodansha, Sentai, TMS, VIZ Media, and Yen Press. This year, over 50,000 fans are expected to gather at Anime NYC from all 50 states and 27 different countries. Countries include: Canada, Mexico, England, France, Germany, Australia, China, Brazil, and Japan.

TurtleMe is the creator of The Beginning After the End, the #1 hit webcomic and web novel series from Tapas. He is Korean American storyteller and grew up admiring action fantasy works in both English and Korean which inspired the creation of his own series where he brings together a blend of western and eastern literature. With the collaboration of The Beginning After the End artist Fuyuki23, both the webnovel and webcomic series update regularly in fast-paced installments to build an epic fantasy that follows the journey of Arthur Leywin, a reincarnated king that is reborn into a new life of magic and twisted fate.

Since its initial release in 2016, the novel consistently updates weekly and is now on its tenth volume. The Beginning After the End—commonly addressed as TBATE amongst fans—was adapted into a webcomic in early 2018 and is now in its fifth season. Today, the web novel is currently available in English and Chinese and as an audiobook via Audible. The webcomic currently publishes in America, Japan, South Korea, China, Thailand, Indonesia, France, Germany, Mexico, and India and debuted as a graphic novel in print published by Yen Press in August 2022.

About The Beginning After The End

Arthur, a former king in a past life, is reincarnated into a new world filled with magic and monsters, where he has a second chance to relive his life. Underneath the peace and prosperity of the new world is an undercurrent threatening to destroy everything he has worked for, questioning his role and reason for being born again. The Beginning After The End Poster