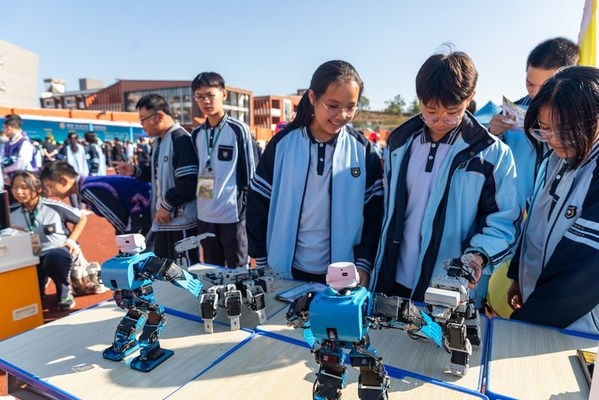 The event was launched in September this year and will last until the end of November, featuring a combination of online and offline activities. The online platform introduced the "Belt and Road Teenagers in the Same Class", bringing together ten science and technology classrooms and experts from nine countries. Professor David, a science popularization expert, performed a science show online and pioneered a novel approach to science education in countries along the Belt and Road, which has been well received by education experts from various countries. The event also featured the online activity "Dialogue with Scientists" and provided more than one hundred science and technology courses and science popularization materials such as "Space Maker", "Low Carbon and Energy Saving", "Images of Science". Guangxi University and Nanning No.3 Middle School put on an online live show to showcase Guangxi’s embroidered ball, Zhuang dance, Guilin landscape and other scenic spots through videos and VR. The event attracted a total of one million teachers and students from 53 countries, regions and international organizations.

In recent years, Guangxi has stepped up the exchange on science popularization among youths with ASEAN countries, Hong Kong, Macao and Taiwan, and successfully held the 3rd Belt and Road Teenager Maker Camp and Teacher Workshop, Guangxi Adolescent Robot Competition and ASEAN & Guangdong-Hong Kong-Macao Adolescent Robotic Invitational Competition, Guangxi Adolescent Science Festival and ASEAN Adolescent Science and Technology Exchange. Through such efforts, the province has built an international exchange platform for science and technology, education and culture among young people. In November 2020, the inauguration ceremony of China-ASEAN International Science Popularization and Exchange Center was held in Guangxi Science and Technology Museum. By giving full play to the role of the exchange center, the Guangxi Zhuang Autonomous Region Science and Technology Association and Guangxi Science and Technology Museum continue to build a high-end international science and technology exchange platform that is based in Guangxi, oriented to ASEAN countries, and covers countries along the Belt and Road, so as to make greater contributions to global exchange on science popularization.