BANGKOK, May 13, 2022 /PRNewswire/ — Thailand’s Eastern Economic Corridor (EEC) is poised to become the new face of smart city development and sustainable solutions in Asia, amid a recently announced foreign partnership in its pilot biorefinery and early wins in its zero waste initiative. 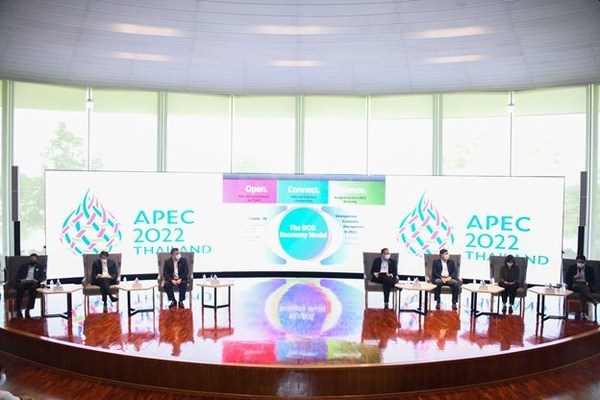 The 3rd APEC Media Focus Group on “Advancing Sustainability Initiatives in the EEC: Achieving a BCG and Net-Zero Carbon Reality”

The recent developments were spotlighted during the third APEC Media Focus (AMF) Group, a press tour organized in Rayong Province by the Ministry of Foreign Affairs meant to engage media representatives on Thailand’s vision and objectives as host economy for the 2022 Asia-Pacific Economic Cooperation (APEC) Summit.

As APEC host economy, Thailand is advocating a Bio-Circular-Green (BCG) Economy Model, and in the EEC, we find concrete applications of that model in development. To adequately explain these concepts and initiatives, the press tour invited a panel of decision makers and scientists involved in the multi-faceted undertaking

Find out more on The 3rd APEC Media Focus Group on "Advancing Sustainability Initiatives in the EEC: Achieving a BCG and Net-Zero Carbon Reality" at https://fb.watch/cYmPlW_P1D/

The Eastern Economic Corridor in brief

The EEC is being implemented across three eastern provinces—Chonburi, Rayong, and Chachoengsao—and includes the development of high-speed railways, seaport, airport, and a university, as well as a host of tax and non-tax incentives to draw foreign and private investment in key areas.

Within the EEC is the Eastern Economic Corridor of Innovation (EECi), an innovation hub situated in Rayong’s Wangchan Valley. The EECi aims to support the transformation of Thailand into a country that thrives on innovation and enhances the quality of life of its people with self-sufficiency and sustainability.

The National Science and Technology Development Agency (NSTDA) has partnered with state-run oil-and-gas firm PTT Public Company Limited to develop 560 hectares within Wangchan Valley as a smart township that incorporates the latest in smart city development (e.g., smart power grid, electric vehicle charging stations, etc.). The goal is for the EECi to become one of the top 10 smart cities in the world within 2037.

BCG Economy in the EEC

The Bio-Circular-Green Economy Model is a strategy for national development and post-pandemic recovery that was introduced by the Thai government to promote the sustainable and environmentally friendly consumption of Thailand’s rich biological resources. By applying the BCG strategy to the EEC’s energy consumption, resource & waste management, and business ecosystem, the development corridor is to achieve net-zero emissions.

In terms of energy consumption, the EEC aims to shift towards 30% renewable and alternative energy supported by a power grid with robust energy storage capacity and offset emissions with carbon credits trading.

In terms of resource and waste management, the EEC aims to eliminate waste in the development area within 12 years by building a network of waste-to-energy power plants. The waste management initiative is expected to reduce waste in landfill areas by 50.72 hectares per year, thereby reducing and preventing greenhouse gas emissions normally resulting from landfills.

The EEC has also planned to achieve international standards of production under the Green and Circular Economy, such as ISO 14021 / 14024 / 14025, to upgrade the overall business ecosystem.

Some of the most innovative solutions that enable the BCG Economy are taking place at the Vidyasirimedhi Institute of Science and Technology (VISTEC), which lies in the education zone of Wangchan Valley. VISTEC prioritizes "high-impact research" with real-world applications.

For example, the C-ROS project (Cash Return from ZeroWaste and Segregation of Trash) is "an integrative biotechnology platform" for developing zero waste solutions. This includes incentivizing waste segregation and developing technologies to process organic waste into biochemicals and biofuels. Organic waste constitutes 50-65% of all waste produced in Asia and is difficult to incinerate because of its high water content.

Since 2018, C-ROS has piloted food waste bioconversion systems capable of producing biogas for cooking and biofertilizers that reduce Thailand’s reliance on chemical fertilizers in the agriculture sector.

More recently, the NSTDA and Belgium-based Bio Base Europe Pilot Plant (BBEPP) have jointly launched the Bio Base Asia Pilot Plant (BBAPP), a multi-purpose biorefinery pilot plant. The BBAPP is the first of its kind in Thailand and ASEAN and will serve to develop and scale up sustainable and commercial bio-based products and processes. This allows local and international clients and organizations to perform feasibility analyses before investing in a full-scale production facility.

The BBAPP is currently under construction at the EECi’s "Biopolis" research hub and is expected to be fully operational in 2024.

Despite the disruptions and uncertainties brought about by a global pandemic unprecedented in scale and impact, Thailand has persisted in its agenda to further economic growth and prosperity in the Asia-Pacific region. Leading by example, the Southeast Asian country has secured international joint ventures and continues to pioneer innovative approaches to become carbon neutral and pivot into target industries.

Its Eastern Economic Corridor has set ambitious goals, but nothing less will suffice if APEC economies are to create opportunities to rebuild after the pandemic and to meet the existential challenges of climate change.