Under the theme of "The Pathfinder", the 2021 WE Summit honors trailblazers that not only pioneered the development of science and technology, but also played an active role in shaping the future thinking of all people. Six guest speakers attended the summit this year, focusing on areas including cosmology, mathematical physics, astrophysics, flexible electronics, energy storage and fuel cells, as well as brain-computer interfaces and intelligent robotics. 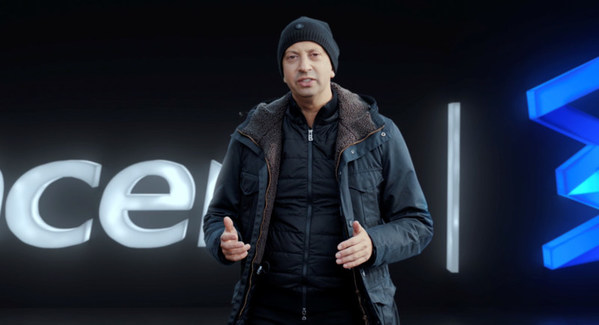 In his opening speech, David Wallerstein, Chief eXploration Officer and Senior Executive Vice President at Tencent (00700.HK), warned that global activity was clearly having an impact on the behavior of the Earth itself, demonstrated by angrier storms, intense floods and raging wildfires in some regions.

"By 2021, it became clear that our practices had to change. We could improve our quality of life, leveraging our new technologies and escaping the traditional constraints of nature while maintaining a new balance with natural forces on Earth," he said.

Throughout all of the work and challenges to stabilize our ecosystems and ensure our long-term survival, humans could "point their technologies above, below, into the Earth, into the ocean, beyond the faintest star" by leveraging the "tremendous powers of exploration," according to Wallerstein, who also stressed curiosity as a fundamental drive for scientific research. 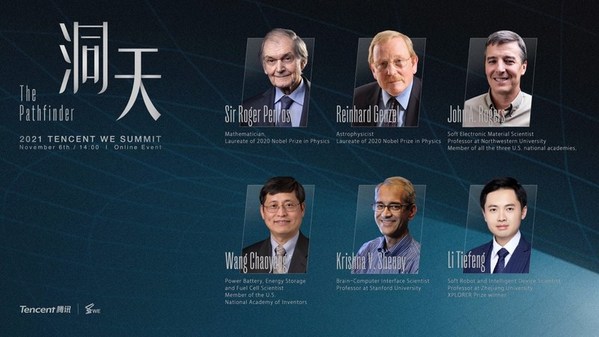 "The Pathfinder", 2021 Tencent WE Summit

From Black Holes to Flying Cars: Innovation for Humanity

Sir Roger Penrose, Emeritus Rouse Ball Professor of Mathematics at the University of Oxford, discussed the evolution of thinking around black holes, singularity and cyclic cosmology, and his experience spending decades alongside great minds such as Stephen Hawking. He and his peers have been leveraging mathematics towards solving large and fundamental questions around the formation of black holes, as well as establishing the foundational mathematical structure that defines modern cosmology. Penrose explained the application of mathematics in general relativity and black hole research and how this offers a window into the "past and present" of the universe. Reinhard Genzel, Professor in the Graduate School of the University of California, Berkeley and an Honorary Professor at the Ludwig Maximilian University, Munich, provided an overview of his 40 years of work in proving the existence of black holes through observational methods, and obtaining definitive evidence that led to the creation of a new field of research on super-massive celestial bodies.

Four applied scientists continued by sharing their latest research and described how these solutions are being used to push the boundaries of health, energy, and robotic technologies. John A. Rogers, physical chemist and materials scientist, and professor at Northwestern University, introduced his work on epidermal electronics and how they are being deployed to patients in need, particularly in pediatric intensive care, while making devices accessible and affordable to low-income groups. Since March 2020, Rogers shifted his emphasis to COVID monitoring devices by working with healthcare professionals to help with pandemic management in the Chicago area. Pennsylvania State University Professor Wang Chaoyang, whose research has led to the development of all-climate battery technology and tapped by the 2022 Beijing Winter Olympics to power electric vehicles during the games, shared some of his latest research achievements regarding 10-minute fast charging batteries, and how the technology represents an important step in the development of truly futuristic advancements such as the commercialization of flying cars with fast charging battery technology.

Krishna V. Shenoy, neuroscientist and professor at Stanford University, shared his recent thinking in the development of brain-computer interfaces, and how the technology can be deployed to support people who have lost of their sense of independence due to existing medical conditions. Li Tiefeng, 2019 Xplorer prize winner and professor at Zhejiang University, revisited his 10 years of research in soft-material robotics, particularly how the novel robotic approach can mimic the movement of soft muscles, and lead to the development of more complex robotic structures or even creatures. His research resulted in the creation of the first soft robotic fish by Chinese scientists, which was able to dive deep into the ocean and explore the 10,000-meter-deep Mariana Trench.

Adopting virtual reality and being livestreamed on more than 60 video platforms including Tencent’s Weixin Channels and Tencent Video, the three-and-a-half-hour online event was successfully held with technology support from Tencent Cloud and Tencent Media Lab. Tencent also collaborated with 14 universities and colleges across China, inviting students and teachers to watch the summit, and hosting sessions where students could freely discuss scientific topics they feel passionate about.

This year, Tencent started a campaign across the company’s user-generated-content platforms connected to the summit to further spread the spirit of exploration, for example encouraging popular Weixin Channels influencers to share summit-relevant content or their favorite or most intriguing scientific knowledge. The company also invited Chinese actor Yang Yang as the ambassador of the 2021 WE Summit, in order to further encourage young people to bravely pursue their scientific dreams.

2021 marks the 9th year of Tencent Science WE Summit. Founded in 2013, the annual event has shared the voices and incredible insights of nearly 80 world-leading scientists, including 13 mathematical physicists, 15 life scientists, and 10 astronomers and geoscientists to over 80 million people. In 2020, a record 25 million people watched the summit’s livestream. Building upon the WE Summit series, Tencent later launched the Xplorer Prize, Medical Enlightenment (ME) Summit, Youth Science Festival, and X-Talk successively to continue pushing conversations around innovation and encouraging everyone to become involved.