"At Tencent, we take climate change as one of the key strategic issues for the company. On one side, we are committed to achieving net zero as soon as we can. On the other side, we are also dedicated to helping other industries decarbonize, leveraging Tencent’s technology and other capabilities", said Xu, during a panel discussion with Carbon Tracker Initiative founder Mark Campanale, and DBS’s Chief Sustainability Officer, Helge Muenkel.

As one of the major Chinese Internet companies at the forefront of environmental trends, Tencent has pledged to achieve carbon neutrality in its own operations and supply chain, and to use green power for 100% of all electricity consumed by 2030.

According to Tencent’s Carbon Neutrality Target and Roadmap Report announced earlier this year, the leading Chinese internet company’s total greenhouse gas emissions and composition in the baseline year of 2021 was 5.111 million tons, roughly equal to the annual emissions of a medium-sized thermal power plant.

"Given that baseline, we planned our net zero journey following three principles. Firstly, we’re going to reduce as much as we can. We did a lot of things around energy efficiency of our data centers and of our office buildings. Secondly, we will try to avoid any emissions that we may have. And lastly, we will use carbon offsets to reduce our emissions, with the lowest priority after reduction and avoidance", said Xu.

Even before Tencent announced its net-zero roadmap, the company had already long been promoting internal emissions cuts. Several of Tencent’s buildings obtained LEED Gold certification. The roof of the Tencent Binhai Building in Shenzhen and the surrounding paving stones consist of water-absorbing sponge bricks to help recycle and reuse rainwater, thereby reducing the consumption of tap water for plant life and restrooms. In addition, the orientation, curtain wall and shutters of the building are specially designed to maximize the use of natural light and reduce the power consumption of internal lighting. By implementing energy-efficiency measures such as optimizing air conditioning controls, in 2020 the Binhai Building saved 5.98 GWh of electricity and reduced emissions by the equivalent of about 2,690 tons of carbon dioxide, compared with 2019.

Tencent developed its fourth-generation T-Block technology for data centers, lowering Power Usage Effectiveness (PUE) to as little as 1.06. The company also implemented emerging technologies such as natural cooling, liquid cooling, tri-generation, water-heat recovery and AI algorithms to boost cooling efficiency and reduce the power consumption of its data centers, a leading source of carbon emissions from internet technology companies. Rooftop solar cells were also installed at data centers. To date, more than 80 MW of distributed new energy projects are either in operation or under construction, and the annual power output of these projects after completion is expected to exceed 80 GWh.

Tencent is also an active player in China’s green power trading market. In 2022, the company signed sustainable power trading contracts for a total of 504 GWh, meaning the actual transaction volume of mid- and long-term agreements in several of its large data centers accounts for 43.5% of their annual electricity consumption. Among them, Tencent Qingcheng Data Center in Guangdong uses renewable energy for 100% of its annual electricity needs. Tencent is also exploring centralized renewable-energy power plants, with a focus on onshore wind and solar technologies, as well as emerging power-generation methods such as offshore wind power. 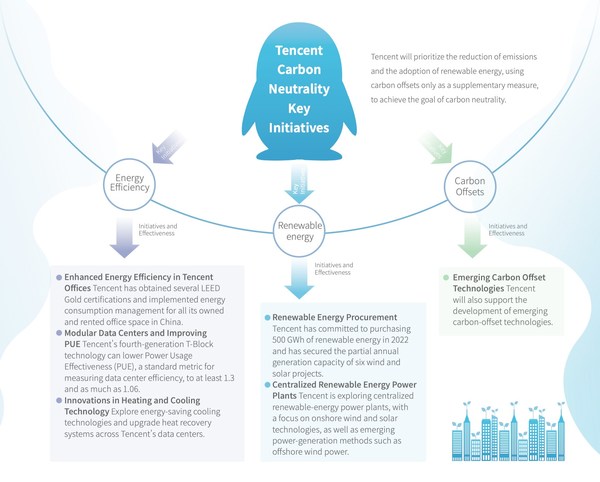 In addition to achieving its own carbon-neutrality goals, Tencent also aims to assist in the low-carbon transformation of society and support emerging low-carbon technologies, leading initiatives as a helper and connecter.

"We think awareness and capability building is quite important in terms of carbon reduction. Climate change is an issue that everybody needs to participate. From our perspective, we already have this platform that can link us with many customers," said Xu.

Tencent is deeply rooted in the consumer internet and has many internet products that are familiar to Chinese consumers and beyond. Its business ecosystem connects massive numbers of consumers, whose choices directly or indirectly affect the carbon neutrality of society as a whole. Based on this wide reach, Tencent realized that it has the responsibility to advocate for a new low-carbon lifestyle. To this end, the company launched a series of internet products that seek to simplify the complex and specialized topic of carbon neutrality, introducing the concept of a low carbon lifestyle through lively and entertaining content.

Its WeChat platform actively promoted emissions cuts and a low-carbon lifestyle through popularizing digital payments in various scenarios across China, including cable fees, metro tickets, gas stations and hospital payments, as well as online donations, therefore significantly reducing paper consumption. Over the past 5 years, reduced paper consumption due to an increase in digital transactions through WeChat has resulted in a total reduction of 188,200 tons of carbon emissions.

In 2021, Tencent partnered with the Publicity and Education Center of the Ministry of Ecology and Environment to launch a carbon neutrality Q&A mini program on WeChat, helping users learn about carbon neutrality and contribute to related charities while participating. Each time they answer a question correctly, the Tencent Charity Foundation makes a donation to support programs that protect grasslands and forests. As of January 2022, 7.7 million users have taken part in the mini quiz in the program.

The interactivity and immersion of games, one of Tencent’s core businesses, make them an effective tool to spread low-carbon awareness and educate the public. This year, Tencent launched a charity game called Carbon Island that simulates a city’s progress toward net-zero, helping to raise awareness of a low-carbon lifestyle among the public. Meanwhile, Tencent Games’ Timi Studio was invited by the United Nations Environment Programme (UNDP) to join the Playing for the Planet Alliance. Since 2021, the environmental protection content of Timi games has reached 110 million players, and helped spread awareness of climate challenges.

"One of the key strategic shifts of Tencent is we are looking at how Tencent can help with industries, and help the digital transformation of industries," said Xu,

As a technology enterprise, Tencent believes it can have a large impact in the low-carbon transformation of various industries through digitalization. Companies cannot achieve low-carbon operation without efficient and convenient online office tools. In 2019, Tencent launched its Tencent Meeting/VooV video conferencing product. Since then, the product has resulted in the cumulative reduction of more than 15 million tons of carbon emissions. Along with the rapid development of digital products, demand for digital infrastructure is also increasing across society. The transition of traditional IT infrastructure to cloud computing has improved the efficiency of resource utilization and offers another potential avenue to reduce emissions. Moreover, the many measures Tencent has taken to reduce emissions at its data centers has not only aided in the progress towards carbon neutrality in its own operations and supply chain, but has also provided low-carbon computing power and helped Tencent’s clients reduce their own carbon footprints.

"If we look at 10-15 years from today, I would argue that the world will be totally different, and that new technology will play an even bigger role, and we’re going to accelerate the past towards a more sustainable future. By that time, hopefully, climate change is not only just a challenge, but the pathway is much clearer, and a lot of actions have already been started," envisioned Xu.