TAIPEI, Jan. 28, 2021 /PRNewswire/ — The gaming fever has been sweeping the football world as of late. Manchester City’s star striker Sergio Agu?ero is one of the top athletes who takes his games very seriously, both on and off the field. As a huge gamer himself, Agu?ero has been actively participating in competitive gaming during the pandemic through livestreaming games such as FIFA. His livestream was an instant hit, attracting tens of thousands of fans, followers and gamers to watch online.

Agu?ero’s love for gaming does not end there as he takes another step forward and extends his passion to the field of pro esports. Devoting a significant amount of time and effort to the esports industry, the global football superstar recently founded a wholly-owned franchise named KRU Esports. The team is planning to enter prominent tournaments and leagues in FIFA 21, Valorant, Rocket League, and CS:GO in the near future.

During an interview, Agu?ero mentioned that for most of his life he played football, a sport which he enjoyed wholeheartedly. He hopes his fans could also devote themselves to what they love and enjoy. That is the main reason why he founded KRU Esports to help those who are as passionate about esports as he is to make their esports dreams come true.

To compete at the highest level of technologically demanding games, the team needs the best technology and hardware to power the players. Agu?ero learned about AORUS, a top-tier gaming brand powered by GIGABYTE that offers some of the most premium PC hardware with impeccable performance. Through common interests, two parties got in touch and hit it off from the start. 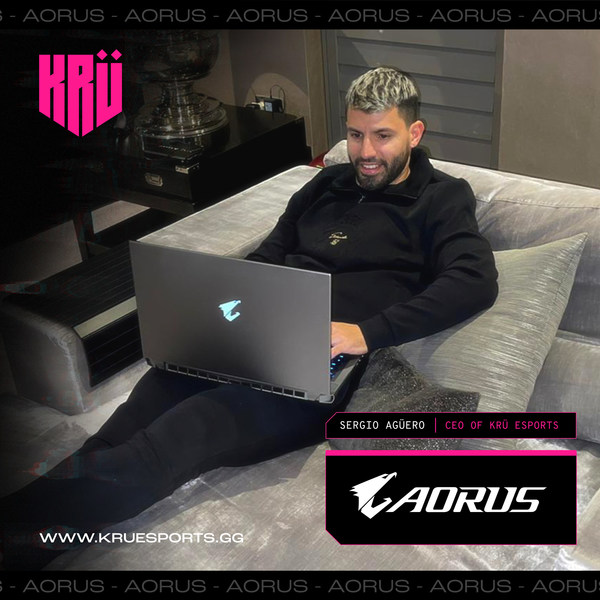 With both sides sharing the same values and passion for esports, a new dynamic duo was quickly formed. By teaming up with AORUS, KRU Esports and Agu?ero are looking forward to building an esports powerhouse that will dominate regions spanning across Latin America and Europe.

As the team owner, Agu?ero also joins forces with AORUS in every way now. Whether the PC battlestation at home, or the gaming laptop he carries around when travelling, they are all powered by the state-of-the-art hardware from AORUS.